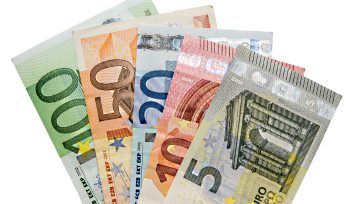 EUR suffered a hit as Mario Draghi hinted that further monetary stimulus could be needed at his opening speech at the ECB Sintra Panel. The ECB President said that quantitative easing has considerable headroom and the Euro responded by losing significant ground against most major currencies. EURUSD fell 0.35% to 1.1195, its lowest level since the beginning of June and below the psychological 1.1200 handle. The pair could now focus on 1.1180 as the next key support. EURJPY lost 0.45% to 121.216, again nearing levels not seen since the beginning of the month. EURGBP was the pair that remained most resilient after Draghi’s comments as investors still lack confidence in GBP and remain cautious. 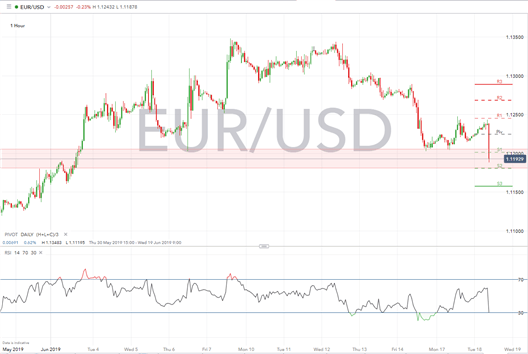 A busy few days lie ahead for EURUSD traders as both the ECB and the Fed are due to give insight on the future of their economies. ECB officials including Mario Draghi will be speaking at a forum in Portugal this week, with key focus on a policy panel with BoE governor Mark Carney due to take place today at 1400 GMT. Wednesday will see the Fed release their interest rate decision where investors will play close attention for any updates on their expectations about future growth and the likelihood of any rate cuts.

EURGBP continues to be Brexit focused as the pair mostly trades sideways with heightened volatility experienced when UK political events occur. Focus will be on BoE governor Mark Carney’s stance on the future of the economy and the need for more monetary stimulus, although it is expected that he will continue to have a wait-and-see stance until the Brexit uncertainty clears.

Increasing the downward pressure on the Euro was the release of the German Zew survey which revealed that economic expectations have decreased to -21.81 in the month of June, down from -2.1 in the previous month and well below expectations of -5.8. Although economic sentiment in Germany, which is greatly influenced by the manufacturing sector, was expected to worsen because of the increased trade tensions that culminated in US tariffs being imposed on Mexico, the figure came in much worse than expected which continued the Euro sell-off across the board. Economic sentiment in Germany has fallen back in to the deep negative, close to its lowest level of -24.7 seen in July and October 2018. The figure picked up gradually at the beginning of 2019 offering a positive reading of 3.1 in the month of April before falling back below 0 in May.