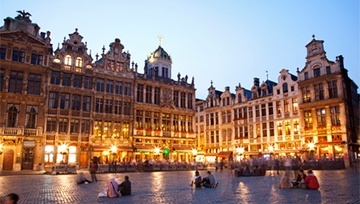 Risk aversion characterized Thursday trade in Asia Pacific markets, echoing the cautious mood seen on Wall Street in the prior trading session. Fears of the US stepping up efforts to blacklist Chinese telecommunication and surveillance companies are fueling greater concern that US-China trade talks could head in the wrong direction.

In Japan, these fears could be seen reflected in the Nikkei 225 which traded about 0.7 percent lower. The nation’s benchmark index was weighed down by telecommunication companies, with shares of SoftBank Group down over 5.5%. Elsewhere, the Shanghai Composite and ASX 200 traded about 0.85 and 0.21 percent to the downside.

The uptick in risk aversion ended up benefiting the anti-risk Japanese Yen, as anticipated. On the flip side of the spectrum, the pro-risk Australian and New Zealand Dollars underperformed, with both currencies also being overshadowed by increasingly dovish RBA and RBNZ monetary policy expectations. The British Pound was also little lower given uncertainty to Brexit if UK Prime Minister Theresa May is ousted.

European indexes and the Euro are bracing for volatility as the first round of European Parliamentary elections begins. EUR/USD is vulnerable should a greater share of eurosceptic parties gain seats. Meanwhile, there will be a slew of Eurozone PMIs that will offer a gauge of economic performance in the regional bloc. Regional data is still tending to underperform, more of the same could sour sentiment.

S&P 500 futures are pointing lower, hinting that risk aversion may continue through the remaining 24 hours. Taking a look at Euro Stoxx 50 futures, to show after-hours trade, they could soon find themselves testing the rising support line from February on the chart below now that we are aiming lower after a retest of the descending resistance line from late April. 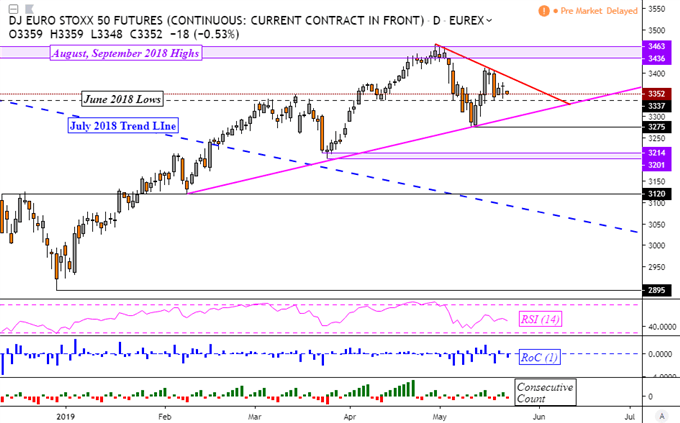