The price of gold is failing to benefit fully from a ramping up of the rhetoric between the US and China that is leading to concern that the trade talks between the two nations are going badly. These worries are leading to a switch from the stock markets into the Japanese Yen and US Treasuries yet, for now, the price of gold seems stuck below the $1,300/ounce level and was actually weaker Monday until a jump higher after China said it will impose new tariffs on US goods. 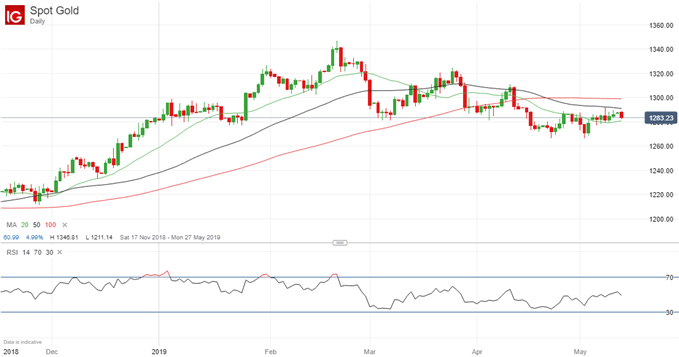 US President Donald Trump tweeted Monday “that China will be hurt very badly” if it does not make a deal “because companies will be forced to leave China for other countries.”He added: “Too expensive to buy in China. You had a great deal, almost completed, and you backed out!”

China replied that it will “never surrender to external pressure” and has also responded to the latest tariffs on Chinese goods by saying it will impose tariffs on $60 billion of US goods ranging from 5% to 25%.

Trump remains likely to meet Chinese President Xi Jinping at a G7 summit in Japan next month but the Japanese Yen still strengthened on his comments and the yields on US Treasuries eased back as traders opted to switch from riskier stocks into government bonds.

This suggests that traders have become wary of gold, which remains well below the $1,346.81 high reached on February 20 and it has gained only modestly since touching a recent low of $1,266.33 on May 2. This is unusual as fears remain that tit-for-tat retaliation could lead to a worldwide recession.

The gold price’s failure to respond fully sends a warning signal to traders that its safe-haven status may be ebbing away and that further falls could be in prospect.

How to trade gold: top trading strategies and tips