Why the US and China are in dispute over IP

In the words of the World Intellectual Property Organization, IP refers to creations of the mind, such as inventions; literary and artistic works; designs; and symbols, names and images used in commerce. The US is convinced that China is stealing its IP and is demanding that Beijing implements significant reforms to prevent that.

So serious is the dispute that the US has imposed tariffs on $250 billion worth of Chinese goods but hopes are rising that the two sides are close to an agreement on all six areas in dispute:

China has responded with new laws and regulations to address IP protection and market access, including 38 penalties against IP violations. In particular, the Supreme People’s Court now has a patent appeals court designed to improve consistency across the country and reduce local protectionism that even some Chinese believe has damaged the country’s reputation abroad.

A new Foreign Investment Law has been approved that will ban the practice of forcing foreign companies to hand over their IP in exchange for access to the Chinese market, and Beijing is clamping down on online piracy. However, there is still no comprehensive law on trade secrets, the trademark registration system in China is widely seen as imperfect and so is a new draft patent law.

Why does the US-China Trade War matter for traders

At first glance, this all seems far removed from the day-to-day trading of currencies, commodities, stocks and bonds. However, concerns about the US-China trade dispute have damaged sentiment throughout the markets, increasing the attractions of safe havens such as gold and US Treasury bonds while lessening the appeal of riskier assets such as stocks.

For now, confidence is high that the two sides are near to an agreement but any setbacks would likely weaken risk appetite and increase haven flows. In the currency markets, the key currency cross to watch is AUDJPY, which tends to rise when sentiment is positive and fall when it deteriorates. 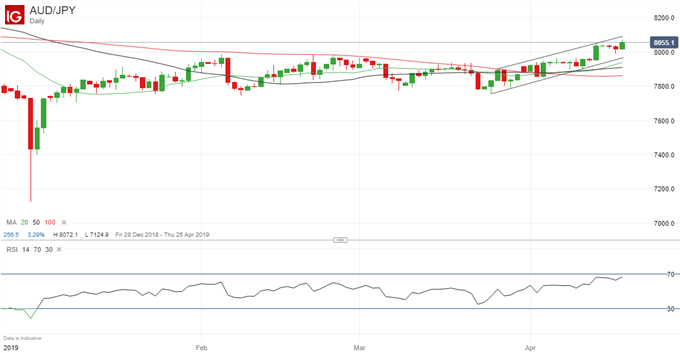 The Australian Dollar is also closely tied to China, which is a major market for Australia’s exports, while the Japanese Yen is seen as one of the bolt holes for traders seeking to reduce their risk profile. For now, the trend is upwards but any setback in the talks would likely send the pair lower again.

In the meantime, it is important to note that technology is an important weapon for both the US and China in their battle to gain an economic advantage over each other. However, while some in the US see China’s attitude to IP as state-sponsored theft – and condemn China for demanding the tech know-how of foreign companies doing business in China – it is undeniable that the Asian powerhouse is making important strides towards protecting intellectual property.