After gapping lower at the open for a second consecutive session, the S&P 500 looked to recoup some of the session’s losses. Similarly, the Dow Jones rallied 200 points and the Nasdaq 80, but both remain below their opening levels – unlike the S&P 500. The rebound followed a series of comments from President Trump on the status of the US-China trade war.

In a press conference outside the White House, President Trump said he has “an excellent alternative to a China trade deal” after receiving a letter from Chinese President Xi Jinping. In following remarks, the President still maintained a tough stance in the negotiations – announcing that the United States is starting the paperwork on 25% tariffs on a further $325 billion of Chinese imports. While seemingly contradictory, optimism outweighed concern as stocks rallied at the prospect of a salvaged deal.

Given that trade war concerns were the driving force behind this week’s equity turmoil, optimistic remarks should command more respect than they have in the past. After a series of Tweets from the President called the talks into question last weekend, any indication that talks are still progressing amounts to a bullish development. US and Chinese trade negotiators will meet today in Washington at 5PM eastern (21:00 GMT), to continue talks. 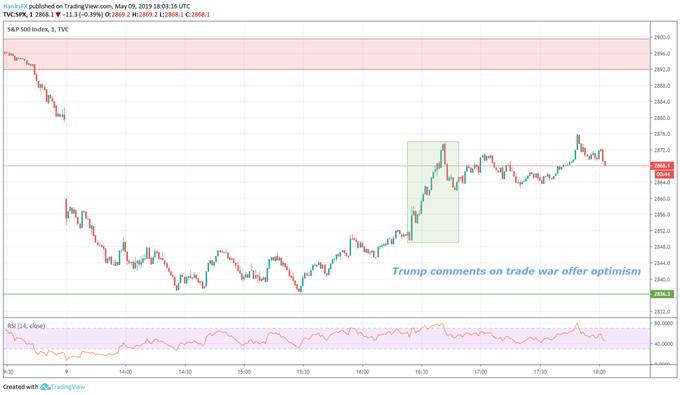 Price action following the comments drove the S&P 500 nearly 25 points higher. Subsequent trading has seen the index hold onto these levels as the market close approaches. From a technical perspective, the index trades above near-term support around 2,836 to 2,840. 2,839 marks March’s daily close before the index gapped higher to open at 2,848 on April 1.

To the topside, levels between 2,892 and 2,900 may provide resistance on a continued climb higher. The area offered both support and resistance in April, as well as some price indecision during Wednesday trading. As Friday’s deadline approaches, all eyes will be on the trade negotiations in Washington later Thursday evening. A breakthrough would likely spur a deeper recovery rally but could be tempered until the exact details of any agreement are released.