JPY/CHF: Safe-haven flows have dominated FX markets with the CHF and JPY the major beneficiaries, most notably the latter rose to a 3-month high against the greenback after making a push through 109.70 (full st. Given the fact that speculators remain heavily short the Japanese Yen (full story), an increase in the tensions between the US and China are likely to keep the risks to the upside for the JPY amid room for further short covering. On the trade war front, the Chief Editor of the Global Times stated that possibility of a trade deal by Friday is zero, which in turn raises questions as to whether negotiations will continue after this week if Trump hikes tariffs on $200bln worth of Chinese goods.

GBP: The Pound has dropped for the 4th consecutive session as the Labour Leader Jeremy Corbyn continued to poor cold water on the possibility of a cross-party agreement, in which the Labour Leader noted that discussions had been difficult, adding that the government needs to shift from its red lines. Consequently, GBPUSD is below the 1.30 handle with focus on the 200DMA situated at 1.2957.

NOK: The Norges Bank continues to be a hawkish outlier with the central bank confirming that they will most likely raise interest rates in June. In reaction to this statement, both EURNOK and USDNOK edged lower, however, gains in the NOK had been short-lived with the currency paring the bulk of the move as focus remains on the external factors regarding trade war concerns and falling oil prices. (Full story) 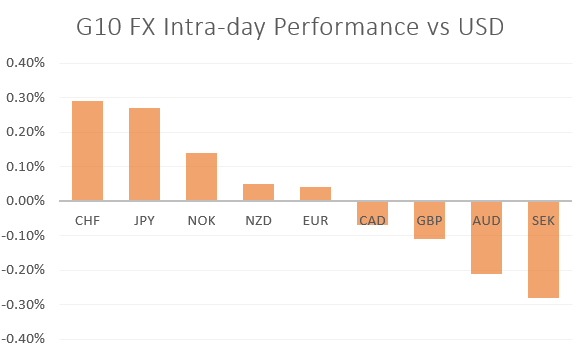