Wondering Why Asian Stocks Lag US Peers? Look At Tech

Are you new to trading? Try the free DailyFX Guide. It’s here.

In a highly correlated financial world, divergence can be instructive. As Asian indexes underperform their US counterparts, the tech sector may offer at least a partial explanation for this particular example of correlation breakdown.

US mainboards have powered up to new record highs in the past week or so, as corporate earnings have filtered out and generally pleased the Wall Street crowd. Naturally worldwide bourses have caught something of a tailwind, and Asian markets have also risen. But, while US stocks set new records, their Asian counterparts’ progress has been much more measured. In all cases, has still failed to claw back all of the dramatic falls we saw as 2018 turned.

The Nikkei offers us a good case in point. 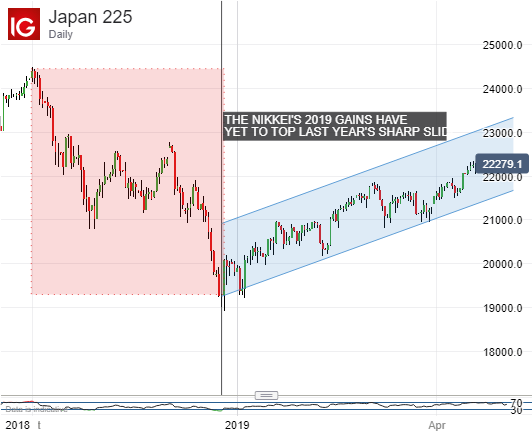 One reason for this Asian-laggard status could well be the underperformance of its once invincible technology sector.

In the US the top-tier FAANG (Facebook, Apple, Amazon, Netflix and Alphabet’s Google) pantheon of companies has generally pleased with its results. Alphabet has the only significant outlier this season. Things have been pretty good for tech below this exalted quintet too, with Twitter, Microsoft and Texas Instruments all at least unveiling at least some good things, even if Intel and IBM didn’t do so well.

Contrast this showing with Asia, where titans such as Samsung, LG Display and Hynix have all disappointed. Samsung managed to miss already-reduced analyst estimates and has had to delay its first foldable smartphone, among other disappointments. Sony managed to buck this gloomy trend with record earnings, but it is a very diluted tech play these days in any case, with broad revenue streams from gaming, financial services, movies and music. The Japanese bellwether also faces a leadership change as popular Chairman Kazuo Hirai steps down, and has tempered guidance for the rest of this year.

This difference in fortune between US tech and its Asian counterparts does not of course entirely account for Asian stocks rather patchier showing in 2019. But it may well explain some of it. Those who watch for correlation differences across markets which often move in step could be well advised to keep a close eye on Asian tech.

It may take a revival here if regional mainboards are to match US vigor once more.