Crude oil prices continue to trade at or near multi-month highs as clashes in Libya continue, adding to concerns that oil production from the OPEC member may be cut back sharply. The ongoing assault on the capital Libya has yet to weigh on current oil production of round 1.1 million barrels per day but this could change quickly, impacting the price of crude.

Crude is also being propped up by thoughts that the economic slowdown in China is not as bad as first feared with traders now waiting for a slew of economic data on Wednesday, including Chinese Q1 GDP. Data last week showed new Yuan loans rising sharply in March to 1690 billion from 885.8 billion, while the trade balanced soared to CNY 221.3 billion from 34.46 billion in February.

DailyFX analyst Daniel Dubrovsky will be covering Chinese GDP Data live on April 17 from 2:45am.

The current oil chart remains positive with prices seemingly supported by the 38.2% Fibonacci retracement level at $70.57/bbl. and the 200-day moving average further down at $68.50/bbl. The 20-day moving average rose though the longer-dated ma at the start of April and this has added another positive sign on the current chart. The market has moved out of extreme oversold territory and is sitting on the recent bullish trend line. 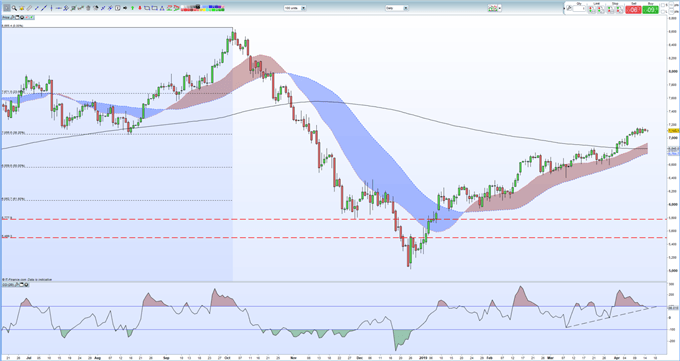