Bank of England Governor Mark Carney and three other MPC members, Sir David Ramsden, Gertjan Vlieghe and Jonathan Haskel, are all appearing in front of the Treasury Select Committee giving their evidence on UK growth, inflation and the central bank’s Brexit preparation. In normal circumstances, the MPC’s views on the UK economy would be the market’s focus, but recent Brexit developments/talk has sidelined their views. While the MPC members continued to focus on a No Deal Brexit and how the central bank would react, it is starting to look increasing likely that a No Deal Brexit is unlikely, if media reports are to be believed.

Governor Carney has repeatedly said, as have other members of the MPC, that the central bank is fully prepared for the expected disruption in the event of a No Deal Brexit. It may soon become the case that Governor Carney and the MPC will have to outline how the central bank will react to potential inflation risks in the case of the UK leaving the EU with a deal, with the path of interest rate hikes coming back into focus. The departure date of March 29 may well be delayed helping in this process, especially if the EU and the UK have found common ground that can and will be voted for by lawmakers in Parliament.

As always, Brexit headlines can change the course of Sterling in a moment and traders need to stay alert for any official rebuttal of the current positive Brexit sentiment. 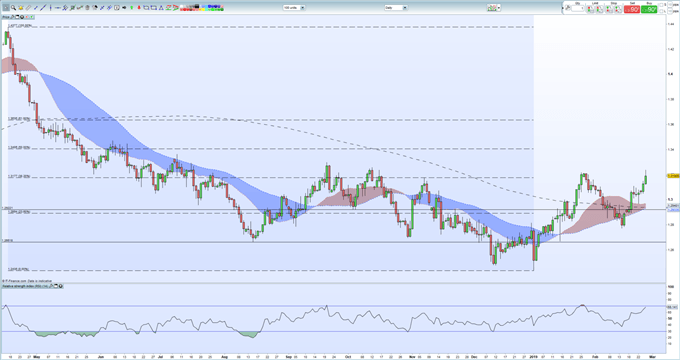 IG Client Sentiment shows that retail traders are undecided on GBPUSD with the ratio of traders long- to short at 53.4%, a bearish contrarian indicator. Recent changes in daily and weekly holdings however give us a mixed trading bias in GBPUSD.