To the chagrin of many bullish investors, February 17th marks the beginning of a 90-day period President Trump will have to act on a report provided to him by the US Commerce Department. The findings may provide information that would see President Trump enact tariffs on automobiles coming from the European Union and Japan.

The Section 232 report was presented to the President just two hours before the 270-day deadline which began in May 2018, shortly after the administration imposed steel and aluminum tariffs on a number of other nations. Those tariffs were also levied on evidence provided by a Section 232 investigation.

View A Brief History of Trade Wars to catch up on the history of economic conflicts.

The threat of auto tariffs come at a critical time for global equity markets as they look to rebound from December’s rout and shrug off global growth and trade war concerns. Further still, some adverse reactions to the investigation may have already been reflected in auto stocks.

Domestic and Foreign Automakers Versus the S&P 500 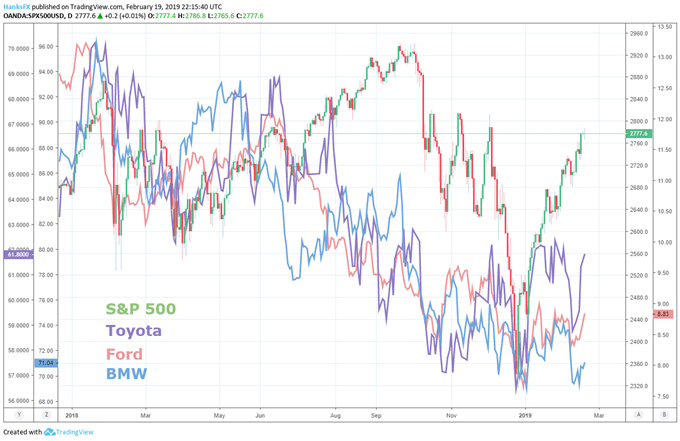 While there are unique factors influencing the share price of each company, it could be argued their collective performance is indicative of a serious headwind. Toyota, and BMW found themselves pressured in 2018 and remain beleaguered in the year to date. Should the tariffs take shape, expect the pressure to amplify considerably. The same can be said for General Motors, Daimler AG, Volkswagen, Honda and others. Given that the risk of tariffs lies on European and Japanese autos, why then would US automakers be in danger?

The Impact on American Autos

Put simply, American autos likely face a similar threat to that of foreign autos. Should the US impose tariffs, a tit-for-tat exchange from both the EU and Japan would likely ensue. In the past, EU Commission President Jean-Claude Juncker has explicitly stated that a tariff on German autos would be met with swift retaliation. That said, US automakers are expected to wage a formidable lobbying effort in Washington D.C. to avoid such an outcome.

The impacts from potential duties on European, most notably German, automakers do not stop at the share price of BMW, Daimler AG and Volkswagen. Any enacted tariffs would likely exert downward pressure on the broader DAX, of which automakers constitute 10-12%, as well as the Euro. 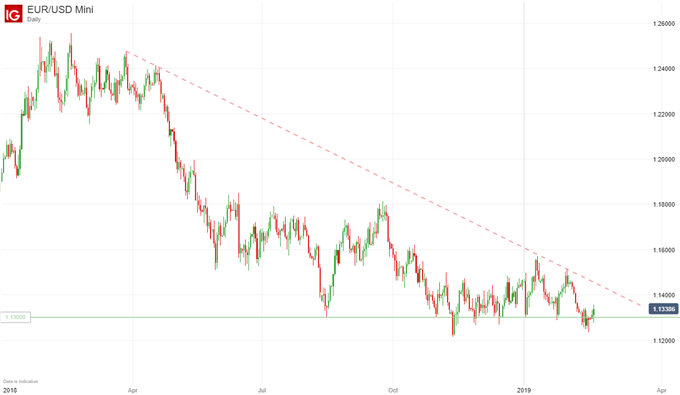 Tariffs could spell further trouble for the Euro which has steadily traded lower versus the US Dollar over the last year. The Union’s longstanding “powerhouse” in Germany may find itself weakened as exports slip and tit-for-tat measures are volleyed between the two allies. Such a bearish development for the bloc’s largest economy would undoubtedly spark investor concern and dent the Euro’s appeal.

Japan has offered a remarkably neutral stance in the recent tariff lobbying. Despite the enaction of steel and aluminum tariffs, the US ally has not replied. Similarly, Japanese officials have repeatedly stated they do not wish to get involved in a trade war. That may change if President Trump finds the Section 232 evidence compelling. Either way, the Nikkei 225 is in a similar situation to the S&P 500 and DAX. For more on this, follow @PeterHanksFX on Twitter for insight and updates on the equity space for DailyFX.

While no tariffs have been levied yet, the 90-day window does not beget investor confidence. Continued uncertainty in the US-China trade talks has been reduced through optimistic statements from President Trump and other officials, but with another tariff situation in flux, the uncertainty may weigh heavy on investor sentiment until deals are cemented.