EUR/USD may fall as Germany prepares to unveil its month-on-month Factory Orders data. Forecasts are at 0.3% percent with the previous at -1.0 percent. The French economy has sputtered recently while Italy has fallen into a technical recession, with the largest economy in the Eurozone only narrowly avoiding the latter’s fate. The impact of trade wars on China’s economy has had a negative knock-on effect on Germany’s growth even as fragmenting European politics generate their own uncertainty.

The largest economy in the Eurozone only narrowly missed a recession recently as France sputters and Italy fell into a recession. The impact of the trade wars on China’s economy also impacted Germany’s growth as fissuring European politics e.g. Brexit produce uncertainty.

The ECB recognizes the severity of the situation and potential obstacles the EU faces in 2019. Addressing the European Parliament last month, ECB President Mario Draghi stated that “…over the past few months, incoming information has continued to be weaker than expected…the persistence of uncertainties, in particular, relating to geopolitical factors and the threat of protectionism is weighing on economic sentiment”.

Overall growth is expected to slow, leaving Germany – on which many countries depend for growth – vulnerable to a recession. This opens the door for a potentially catastrophic Eurozone crisis as the EU prepares to have the European Parliamentary elections in spring. Under these circumstances, German data may be more closely monitored than before as traders attempt to gauge the outlook for Europe.

In the more immediate future, EUR/USD is trading slightly lower after re-testing 1.1478 and may reach closer to 1.1358 if the data disappoints. Conversely if the report comes in better than expected the pair might aim for 1.1435. For the time being EUR/USD is floating around 1.1406, possibly waiting for the outcome of the upcoming data and any major developments from the US President’s State of the Union address. 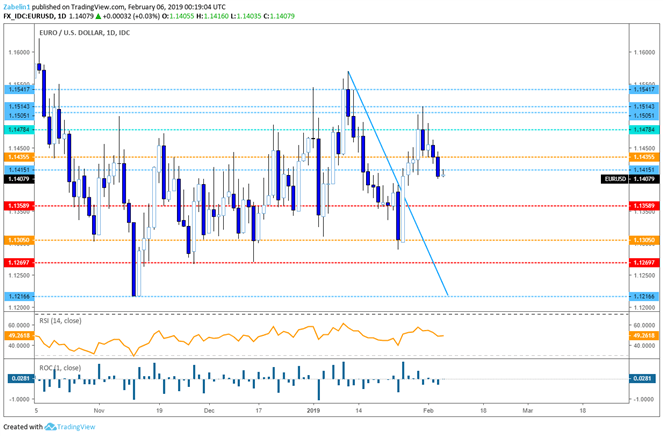