BREXIT LATEST: STILL A MESS, BUT WITH LESS TIME UNTIL THE DEADLINE

After last week’s vote in the House of Commons on amendments to British Prime Minister Theresa May’s withdrawal plan, the EU Parliament the following day debated the modified proposals. The primary sticking point has been the Irish Backstop, an insurance policy designed to prevent a hard border between Northern Ireland (member of the UK) and the Republic of Ireland (member of the EU) in the case of a no-deal Brexit.

Several prominent EU officials re-iterated that they are not interested in re-opening the Brexit withdrawal agreement and were particularly assertive on keeping the backstop. This has not stopped the UK from attaching a non-binding amendment that would seek to create “alternative arrangements” for the backstop.

However, a new modified withdrawal agreement has been floating around parliament that is beginning to gain the attention and support from both Brexiteer Tories and Remainers. It has come to be known as the Malthouse Compromise, named after MP Kit Malthouse who first tabled the proposal.

Broadly speaking, the proposal is composed of two parts. Plan A would request an extension of the transition period by one year from 2020 to 2021 and would amend the backstop to a basic free-trade agreement. It would employ the use of “proven solutions” to avoid border checks.

Plan B would be in the case of a no-deal Brexit and would also ask for an extension of the transition period to cushion the impact of the hard divorce. Even if such an agreement could pass in the UK Parliament, it would then require the EU to accept re-opening negotiations.

Amid the uncertainty, markets will be watching this week’s ‘Super Thursday’ as the Bank of England prepares to announce its decision on rates, the release of the meeting minutes and the quarterly inflation report. Traders will also likely be looking for comments from officials regarding how or if the current state of Brexit is shaping the central bank’s monetary policy.

Since December 11, GBP/USD has climbed over five percent but began to retreat after failing to breach 1.3199. The pair have begun to move closer to 1.3029 against the backdrop of uncertainty over the outcome of Brexit. The decline after hitting resistance can be viewed as a signal that traders are probably not very optimistic about the Pound’s upside potential given the current state of negotiations. 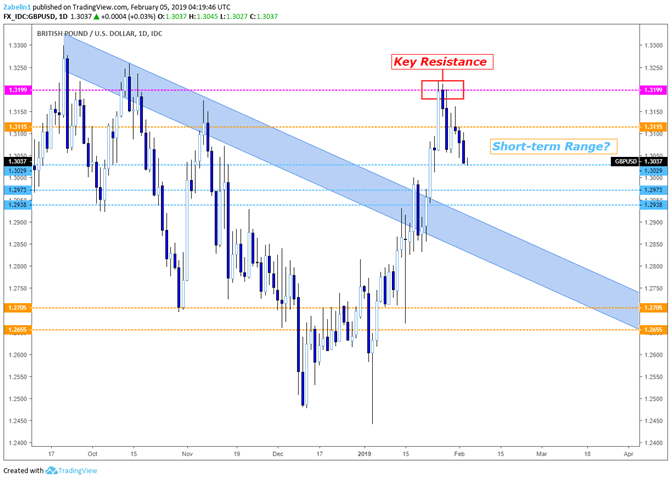 Looking ahead, the more immediate market-moving events – barring any sudden developments from the Brexit talks – will be the BoE decision and outlook on policy going forward. Until then, the Pound may hold steady between 1.3029-1.3115 as investors wait to hear what policymakers have to say.