The Euro may be closely watched this week as a cascade of data out of the EU is scheduled to be released on January 31. Markets will be eyeing data coming out of Italy in particular, given the state of its economy and the recently semi-resolved budget dispute. All of this would be occurring against the backdrop of forecasted slower growth – with data in recent months confirming it. 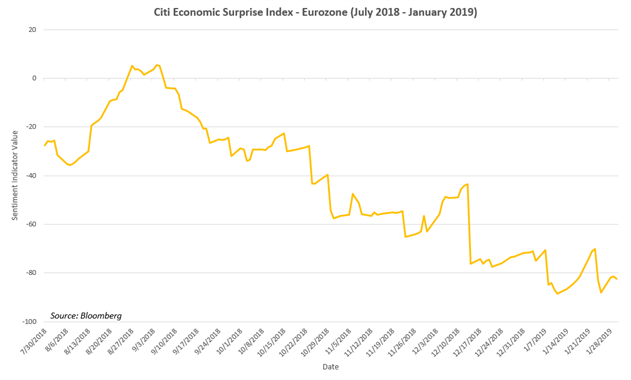 Doubt in the underlying strength of the Italian economy can be most obviously seen in the spread between Italian and German ten-year bond yields. Its sharp widening since May indicates that investors have greater trepidation in lending to Rome over Berlin. The gap’s growth accelarated during the months of debate over Italy’s controversial budget proposal. 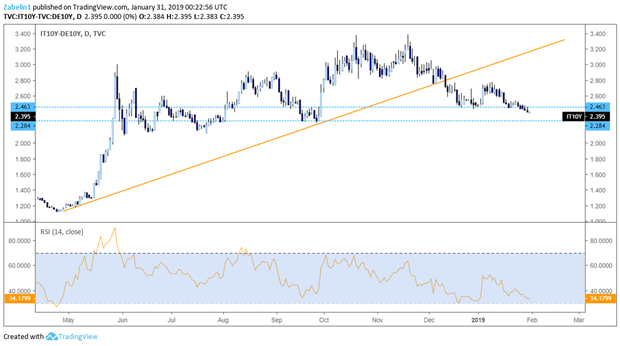 Tomorrow, this spread may expand further if Italian GDP comes in at or below the current forecast. In the third quarter, GDP shrunk to -0.1%. If the country reports another consecutive contraction, it will have entered a technical recession.

The danger behind this – besides the obvious complications a recession poses – is it may re-ignite the budget dispute between Rome and Brussels. Officials may demand that the Italian government revise their already watered-down budget of 2.04 percent (down from 2.4) even lower if the country is undergoes a recession.

Deputy Prime Ministers Luigi Di Maoi of the Five Star Movement and Matteo Salvini of the Lega Norda will likely push back against any further reforms. The populist government’s campaign was built on an anti-establishment platform. If they were to capitulate to Brussels, it could potentially undermine their political clout and endanger their performance in the 2019 European Parliamentary elections.

Other key indicators of economic health – such as PMI Manufacturing – will likely be under observation. If Italy, the third largest economy in the Eurozone, enters a recession and indicators reveal underlying economic momentum is lagging, the Euro may fall over fears of a possible Eurozone crisis.

Key economic indicators coming out of France for the past few months have been lackluster at best with many barometers – such as consumer confidence and manufacturing – falling short of expectations. While Consumer Confidence and quarter-on-quarter GDP did outperform relative to forecasts, the broad trend remains on the downside.

Some of the impact on these indicators are politically rooted. The recent eruption in France with the Yellow Vest protestors have weighed on economic performance. This week, the second largest economy in the Eurozone will have its CPI and Manufacturing PMI data released on January 31 and February 1, respectively.

This comes after the year-on-year Producer Price Index performed worse than the previous report, and consumer spending fell short of forecasts by a substantial margin. Looking ahead, monitoring developments relating to the Yellow Vest protests will be crucial in order to understand the impact it has on the French economy and the possible effect on the Euro.

The German economy narrowly avoided a recession this year when quarter-on-quarter GDP reported a positive number after the -0.2 percent contraction in Q3. If the largest economy in Germany undergoes a recession, this would not likely bode well for the Euro, considering the precarious state of the other major Eurozone economies.

This also comes during a time when the popularity of Europhile liberals – such as French President Emmanuel Macron and German Chancellor Angela Merkel – are declining while Eurosceptic populism is on the rise. The economic implications of an ideological re-alignment during an economic slowdown will not likely bode well for the Euro’s long-term outlook.

On the data front, Germany’s retail sales, unemployment reports and Manufacturing PMI is scheduled to be released on January 31 and February 1, respectively. Similar to France and Italy – and most of Europe for that matter – economic data even in the German economy has been unimpressive and – now more frequently – underwhelming.

The combination of slower growth and acceleration of liberal-alternative ideologies has the potential to create a negative feedback loop. Studies have indicated that when economic conditions worsen, the propensity for voters to swing to radical ends of the political spectrum increases. The election of Eurosceptic officials with anti-establishment economic agendas could then threaten the integrity of the EU and weigh on the Euro.

IMPACT, OUTLOOK ON THE EURO

In the long-run outlook, the Euro will likely fall given the potential political economy headwinds the currency faces in 2019. In the shorter term, EUR/USD appears to have broken through the January resistance and more recently shot up through the 1.1435 price barrier and closed above it at 1.1478. 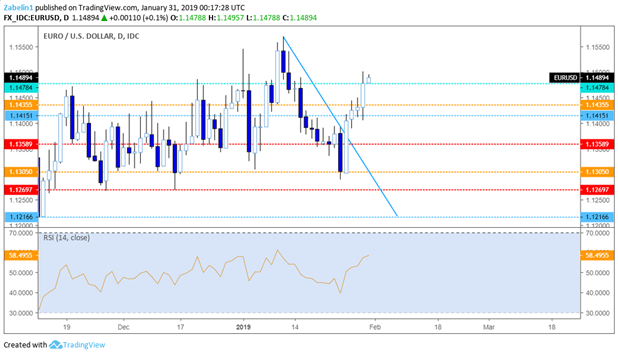 While for Euro bulls this may be encouraging, it is important to not forget the long-term outlook. Since April, EUR/USD has declined over 10 percent. Given the outlook for 2019, it is likely the Euro will continue to fall, barring any unexpected developments that could push the Euro on a long-term upward trajectory. 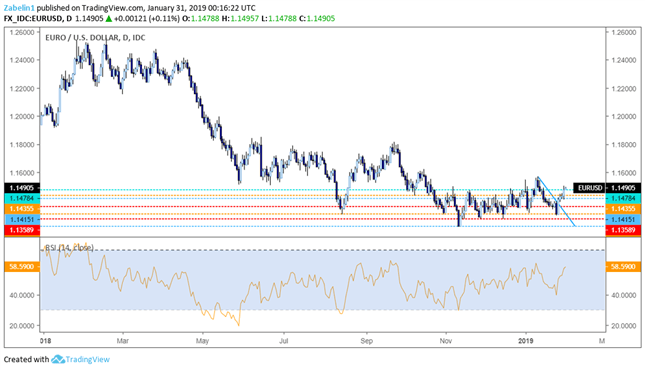