Will the Euro Fall on France Consumer Confidence? Riots in Sight

EUR/USD may dip after France’s CPI data is released on January 29 at 07:45 GMT. Forecasts currently stand at 88 with the previous report showing 87. Broadly speaking, economic data coming out of France has been lackluster and frequently falling short of expectations. The Yellow Vest (gilet jaunes) protests have played a crucial role in France’s economic performance, particularly consumer confidence. 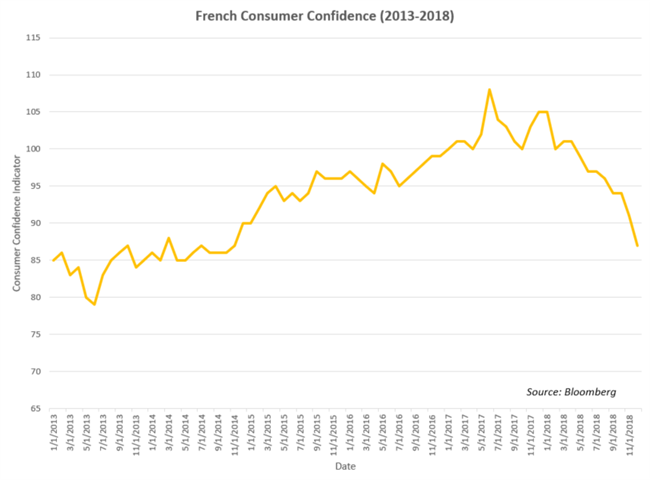 The protests emerged in the last breaths of 2018. The protesters were motivated primarily by rising fuel prices, the high cost of living and grievances against certain tax codes. The protests turned into riots and eventually devolved into clashes with police and the destruction of property.

The participants involved gave a list of demands, some of which required the repealing of the fuel tax, raising the minimum wage and the resignation of President Emmanuel Macron. As a result of the domestic tribulations, his ratings have plummeted. Meanwhile, nationalist politician Marie La Pen’s popularity has grown, putting France in danger of having a Eurosceptic representation in the European Parliament in 2019.

The disturbance from the protests have only worsened, with a counter-movement known as the “Red Scarves” (foulards rouges) having marched against the initial protestors this past Sunday. This kind of political fissuring and discontent is part of a broader European trend in political fragmentation that may be made more apparent this year in the European Parliamentary (EP) elections in May.

The protests have resulted in trade losses because of blocked routes necessary for transportation along with slower consumption. Other notable indicators that have taken a hit have been the Composite and Services PMI data, coming in at 47.9 and 47.5, undershooting the forecasts of 51 and 50.5, respectively.

The Yellow Vests are now beginning to organize themselves into a political unit and are aiming to participate in the EP elections. They are currently forecasted to win 13 percent of the vote. Macron may also anger Eurosceptics around the continent because his revised budget deficit – as a way to accommodate the protestors demand – may breach the 3 percent threshold. This would put Brussels in a tighter spot with Italy.

As the third largest Eurozone economy – following the UK and Germany – what happens in France politically and economically can bear tremendous implications for the Euro. Growth in Germany is already slowing, Italy is teetering on a recession, and the UK is in the midst of a tangled Brexit arrangement.

The Euro, after breaking above a key resistance, appears now to be bouncing off 1.1435, and could potentially head down to 1.1415. If French Consumer Confidence comes in lower than expected, it could cause EUR/USD to break below the latter price level. 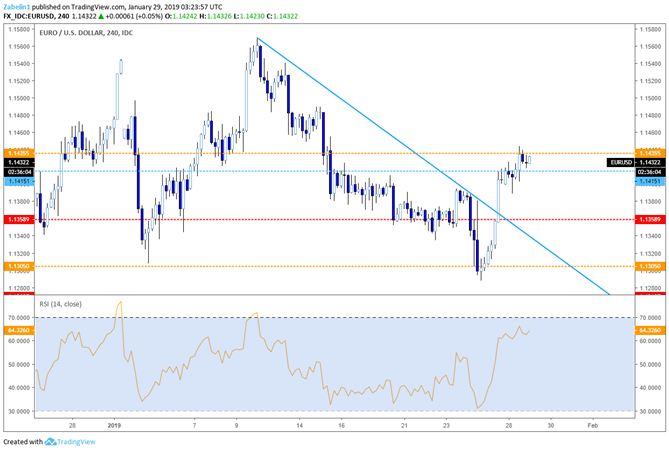 Later this week, a cascade of European economic data will be released primarily on January 31 and February 1. The release of these indicators – particularly Italy’s GDP – will almost certainly impact the Euro. The IMF, ECB and World Bank all have made forecasts of slower growth in Europe. This data will therefore be a key event to monitor because the results could validate the outlooks and exert pressure on the Euro.