The Euro may fall after the EU Commission meeting on December 19th where European leaders will possibly discuss implementing the Excessive Deficit Procedure (EDP) against Italy. The EDP has never been used before on a member state and may entail economic fines between 0.2-0.5 percent of GDP.

This comes shortly after news broke on Monday that a budget agreement between Brussels and Rome had not been reached. This follows last week’s European Council meeting that came after months of negotiations between Italy and the EU over the controversial budget.

Since May, the spread between Italian and German 10-year bonds has widened by over 120%, signaling greater skepticism of lending to Rome over Berlin. Since April, EUR/USD along with EUR/CHF has been falling as the region faces increased political fragmentation, slower growth and more uncertainty. The Euro, as a result, has suffered and will likely continue to fall into Q1 2019. 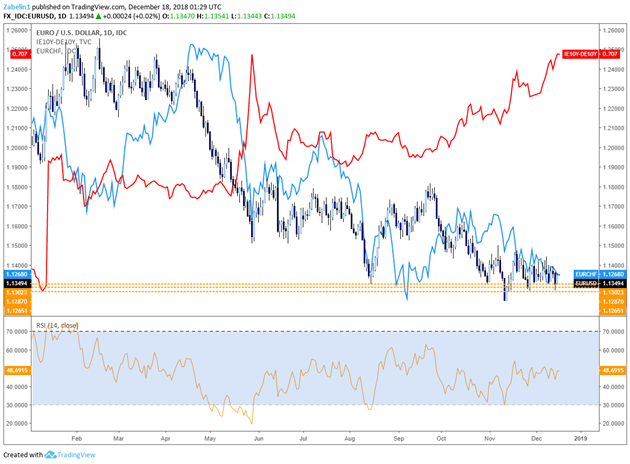 Brussels is caught between a rock and a hard place. If they are too harsh and punish Italy to such a degree that it plunges the country – which already has a slowing economy – into a recession, it then ratifies all the government’s claims that Brussels is a sovereignty-violating leviathan. This would in turn strengthen eurosceptics throughout the bloc and lead to greater fragmentation.

If, however, the EU is too lenient, it will be read as a sign of weakness by anti-establishment groups which will likely take advantage of the situation and seek to implement their own agenda. Either outcome will not bode well for the Euro or European equities. The anti-risk Japanese Yen and Swiss Franc, however, may outperform in the risk-averse environment.