The annual World Economic Forum (WEF) in Davos, Switzerland, will be running from January 22-25 as heads of state, economists and business executives all gather to discuss the outlook for growth in 2019. However, US President Donald Trump and British Prime Minister Theresa May will be absent due to pressing domestic issues of the government shutdown and Brexit deal vote, respectively.

Prior to the start of the official conference, the IMF published its forecast for global growth in 2019 that dampened an already somewhat grim forward-looking environment. The outlook for growth this year was cut to 3.5 percent, the slowest in three years. Trade wars were cited as a key source of risk. Slower growth in China is to be expected, particularly if the trade wars persist and continue to impact GDP.

China is also seeing a rise in the default rate in corporate bonds, a possible sign of greater weakness and vulnerability in the economy.

Euro area growth for 2019 is forecasted at 1.6 percent – 0.3 percent lower than the projections in the fall issue of the bi-annual Global Financial Stability Report – and 2020 has growth pegged at 1.7 percent. Recent economic data coming out of Germany, France and Italy certainly reinforced the idea that growth in Europe is slowing.

Europe is also still dealing with the wave of nationalism that has crashed over the continent, making policymakers nervous for the European Parliamentary elections in the spring.

Germany has been reporting subpar consumption and weak industrial production data and Italy is teetering on a recession – compounded by high borrowing costs. This comes on top of the negative impact of the yellow vest protests in France that sent French bond yields soaring and has appeared to dampen economic data. 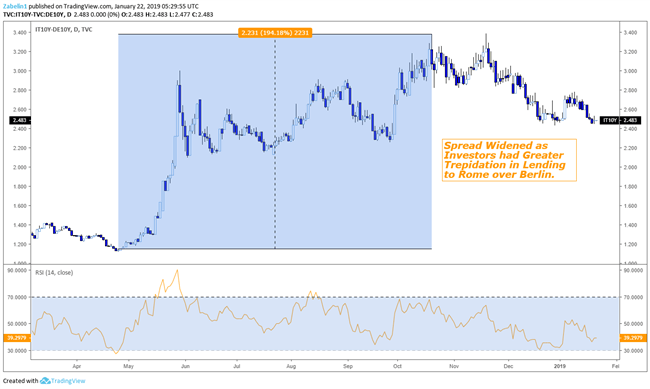 Leading up the event, currency markets have remained broadly steady as traders wait to hear comments from officials. However, given the outlook from the IMF and other institutions and world leaders, it is possible that the comments coming from the event will reinforce the risk-off narrative, leading to a rise in the US Dollar and Japanese Yen.

The Dollar has risen over seven percent since April, and with risk aversion souring risk appetite, it is possible we may see the Dollar continue to rise in 2019 along with the Japanese Yen. Comments from officials will therefore be crucial to monitor as a way to gauge market sentiment and the potential demand for anti-risk assets. 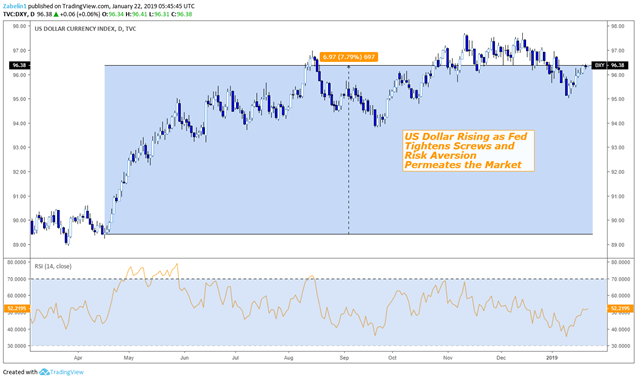 To get further insights on the World Economic Forum, follow me @ZabelinDimitri to get my take on the talks and the possible market reactions!