Pressure on OPEC to Cut is Building

The decline in oil prices persists with WTI and Brent crude breaking below $50 and $58 respectively. Given that there are little signs of the sell-off abating, OPEC+ members will be under increasing pressure to carry out a fresh round of oil cuts. However, judging by the recent commentary, a sizeable cut may be in doubt. Yesterday, the Nigerian Oil Minister echoed similar comments made by the Kuwaiti Oil Minister, that it is too early to say that they would be willing to participate in any cuts, while other members, including Libya and Iraq had also appeared unwilling.

500kbpd: A cut of this size would not be enough to lift oil and would most likely see oil prices resuming its selling. This in turn may see WTI test $42/bbl with Brent at $50/bbl.

1mbpd: This would be the bare to minimum to help ease the ongoing sell-off in oil prices, while this would also be the reversal of the 1mbpd boost in oil production by Russia and Saudi Arabia back in September.

1.4-1.5mbpd: Forecasts have suggested that anything less than a cut of 1.4-1.5mbpd would likely lead to an increase in global oil inventories in H1 2019. This would undoubtedly have the most bullish impact on prices, however, a sizeable cut would likely be highly criticized by President Trump.

Another rise in US crude stockpiles continues to suggest that there is an abundant supply on oil in the market as stockpiles rose for a 10th consecutive week. This was in part due to the US selling off its strategic reserves from October 1st – November 30th. However, now that the proposed sale will be coming to an end, this will be one bearish factor that will abate with the DoE data potentially beginning to report drawdowns in the near term. 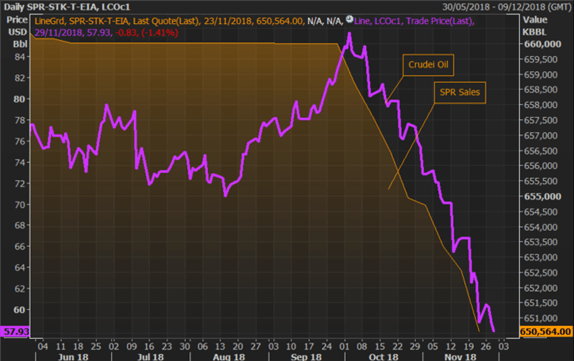 As WTI briefly dips below $50/bbl, a close below could open up the doors for a test of crucial support situated at $47.55, which marks the 23.6% Fibonacci Retracement of the decline from 112.24 to 2758. This coincides with the rising trendline stemming from the August 2016 low.