- Resignations by the Brexit Secretary Dominic Raab and the Secretary of State for Work and Pensions Esther McVey have stoked fears that parliament will reject UK PM Theresa May's Brexit deal.

- The British Pound has started to price in a 'hard Brexit' or 'no deal' scenario, falling over -1.4% versus the US Dollar so far on Thursday.

The British Pound is having its worst day in all of 2018 thanks to a breakdown in the Brexit process, and its worst day overall since June 9, 2017, when UK Prime Minister Theresa May's Tory party lost its majority in the House of Commons.

Coming less than 24-hours after the prime minister announced an agreement reached between her cabinet and the EU, price action among GBP-crosses today is nothing short of a swift condemnation of the direction in which the Brexit negotiations are now pointed.

The resignations of Brexit Secretary Dominic Raab and Secretary of State for Work and Pensions Esther McVey have stoked fears that UK PM May simply won't be able to pass her Brexit deal through parliament. By stepping down from her cabinet, ex-ministers Raab and McVey are now free to vote against the Brexit deal in parliament.

There have been some smaller dominoes to fall (junior ministers), and markets are starting to price in what would be the worst case scenario for the British economy: a 'hard Brexit,' or 'no deal.' If UK PM May isn't able to whip the votes in Parliament, it's possible that the EU-UK scheduled for November 25 to be postponed. Should the summit be postponed, it would be another blow to the British Pound.

Yesterday we expressed concern that cabinet ministers could resign; today this has happened. Now, traders should be looking to see if no confidence vote will be called. It still holds that a challenge to leadership at this stage of the Brexit negotiations would heighten the odds of a 'hard Brexit'; in turn, it's possible that a rejection of PM May's Brexit deal ultimately leads to a second Brexit referendum, and even a second Scottish independence referendum, sometime in the first half of 2019. 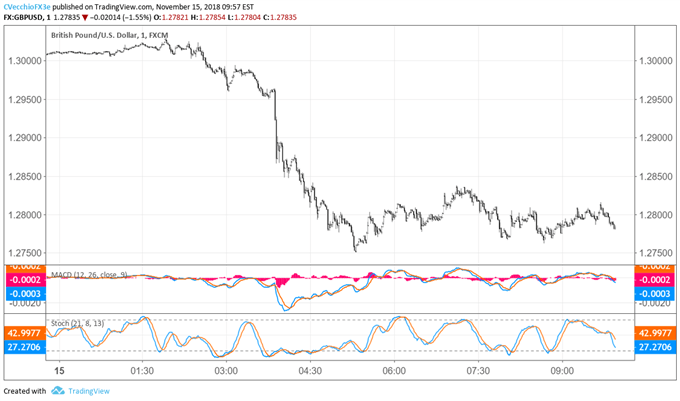