Most Asian stocks clawed back into the green on Monday after a tepid start characterized by the global growth worries which had weighed last week. Oil prices were also in focus following comments from OPEC at the weekend suggesting that rising production and a tepid outlook for major economies will leave the market oversupplied into 2019. Saudi Arabia announced a production cut for December in an effort to halt a supply glut which has seen prices lose 20% since the start of October.

Still, investors clearly decided that equity had suffered enough for now part-way through the Asian morning. The Nikkei 225 was up by 0.2% as its close loomed, with the ASX 200 in the green by 0.2%. Similarly modest gains were evident in China, with Shanghai up 0.6% and Hong Kong higher by 0.1%. Only Seoul’s Kospi bucked the general trend, as it often seems to do these days, falling 0.4%.

The Nikkei 225 is flirting with the uptrend line which had previously held the market since October 29. 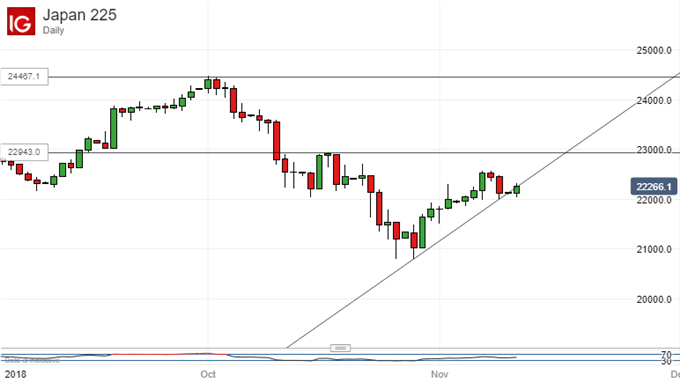 This is interesting because it looks as though the still-nascent recent uptrend is fading out before it has reclaimed the precious significant peak – the 22,943 hit in late October. Conclusive failure to hold above the current uptrend, defines as a daily or weekly close below it, would put the 21000 region back in bearish focus.

The US Dollar built on last week’s gains and inched broadly higher, supported as it often is by the prognosis of yet-higher interest rates from the Federal Reserve. The British Pound came under pressure again as markets continued to doubt whether the government’s Brexit deal will get through parliament.

Crude oil prices added a little over 1% as the markets digested that Saudi announcement earlier.