The US Dollar appreciated against its major counterparts while the S&P 500 declined on November’s FOMC monetary policy announcement as anticipated. Policymakers left rates unchanged, noting that ‘further gradual increases’ are ahead. Upbeat commentary on unemployment, household spending and inflation accompanied the announcement. This also followed October’s aggressive stock market selloff.

While the next hike is anticipated in December, those bets were not fully priced in heading into Thursday’s rate decision. This may have explained why the greenback rallied and Wall Street ended the day mostly in the red. Indeed, US government bond yields rallied following the interest rate announcement, suggesting that the Fed fueled rate hike expectations.

Following the Fed, reports from Reuters crossed the wires that Canada is pushing back amidst efforts from the US to change the new NAFTA trade deal text. According to the source, “some of the stuff they have been putting forward is not at all what we agreed to”. As a result, the Canadian Dollar further depreciated against its major peers as uncertainty once again clouds the USMCA.

With that in mind, Asia Pacific benchmark stock indexes risk echoing weakness from Wall Street as regional bourses digest the Fed and an impending rate hike in December. The Nikkei 225 and ASX 200 may be left vulnerable. For the anti-risk Japanese Yen though, this may translate in broad gains as carry trades unwind. Meanwhile the pro-risk Australian Dollar may fall, looking past the RBA statement on monetary policy. The central bank is still in no rush to adjust rates as is.

The US Dollar appears to be attempting to resume its dominant uptrend in the aftermath of a falling wedge bullish continuation pattern. DXY failed to fall through a near-term rising trend line from late September and the Fed lifted it towards a horizontal range of support between 96.98 – 97.20. That contains the October 31st high. A push above that exposes the June 20th, 2017 high. 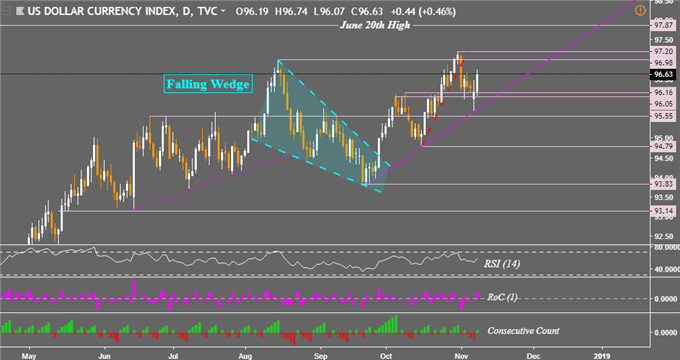 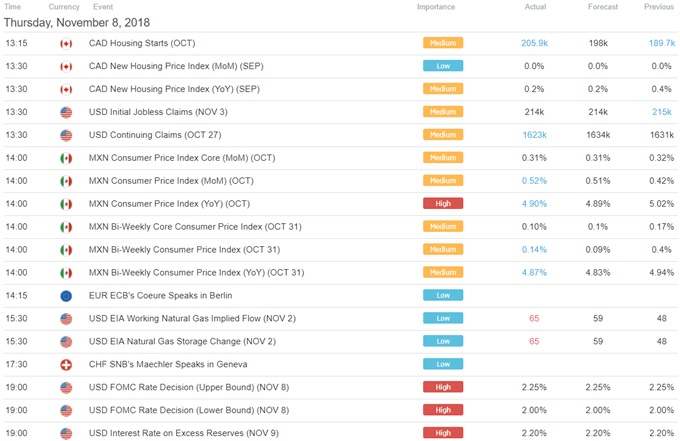 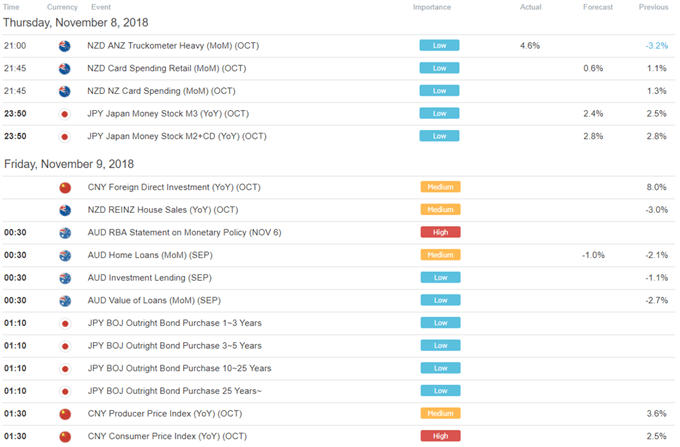