As anticipated, the New Zealand Dollar soared after a better-than-expected local employment report crossed the wires. New Zealand’s unemployment rate dropped significantly from 4.4% in the second quarter to 3.9% in the third, economists were anticipating for it to hold steady at 4.4%. This marks the lowest jobless rate since the second quarter of 2008, more than ten years ago.

More good news could be found in other aspects of the data, employment rose by 2.8% y/y versus 2.0% expected and 3.7% prior. On a quarterly basis, the country increased hiring by 1.1% compared to 0.5% estimated and 0.6% in Q2. The latter was at its fastest pace in exactly one year. On top of that, the labor force participation rate unexpectedly soared to 71.1% from 70.9% which matched the 2017 record high.

Finally, average hourly earnings clocked in at 1.4% q/q versus 0.8% expected and 0.2% prior. That was the most impressive rate of pay growth since the third quarter of 2014. Overall, these statistics match the general trend of local economic news flow tending to outperform relative to economists’ expectations. This suggests that their models are underpricing the health and vigor of New Zealand’s economy.

Domestic government bond yields climbed alongside the New Zealand Dollar, hinting that the data further reduced remaining RBNZ rate cut bets. Combining this jobs report with local CPI also beating estimates in the third quarter offers a compelling argument that the Reserve bank of New Zealand may shift its forward guidance tomorrow. At the moment, they have their doors open to a rate cut and a hike as their next move.

Should the central bank shift its tone to favoring a rate hike as their next move, there may be room for more NZD gains. With that said, a result to the contrary would probably erase a lot of the significant progress the Kiwi Dollar has made recently. But for now, the New Zealand Dollar looks to the 2018 US midterm elections first. Results should cross the wires early into Wednesday’s trading session. 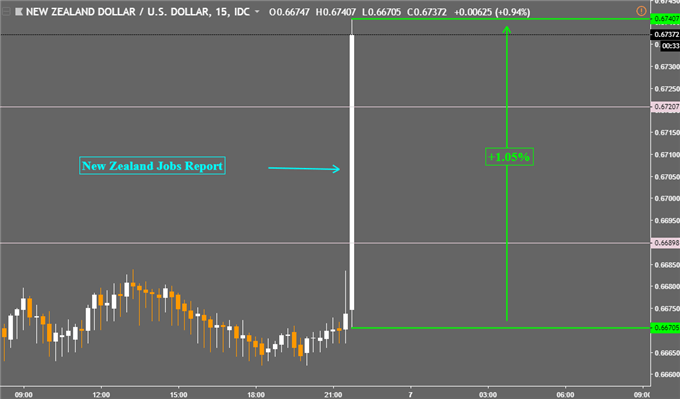 The New Zealand Dollar has at this point overturned its dominant downtrend since June. Prices are continuing to climb above the descending trend line from then. Now, resistance has been breached above 0.67207, opening the door to testing 0.68543 next. Meanwhile a descent through support exposes the February 2016 lows between 0.65454 and 0.65633. 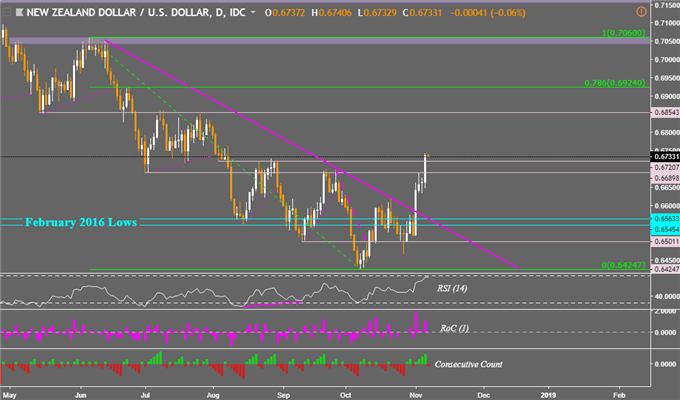