The New Zealand Dollar is off to a strong note during the early phase of this week, bolstered by a better-than-expected third quarter inflation report. New Zealand y/y and q/q CPI clocked in at their fastest pace since Q3 2017 and Q1 2017 respectively. Local government bond yields rallied as the data crossed the wires, signaling ebbing dovish RBNZ monetary policy expectations.

While probabilities of a rate cut from the central bank were never particularly high, back in August overnight index swaps were pricing in a 30% chance of one for February 2019, this could make it even more unlikely depending on what they say. The RBNZ has pointed out that their next policy move could be in either direction. The inflation data could make them lean away from that, hence NZD gains.

Still, given risks from the external front, gains in the ‘pro-risk’ NZD may not last as emerging markets remain under pressure amidst trade wars and Fed policy tightening. But against the Australian Dollar, Kiwi Dollar could yet find more appreciation in the event the RBNZ adopts a tone that favors a hike as opposed to a balanced view. With that in mind, our AUD/NZD short has been exited after a daily close under 1.08415.

Elsewhere, the US Dollar was cautiously lower against its major counterparts. The greenback weakened during the first half of Monday’s session as the DAX and Euro Stoxx 50 climbed. This was also when we saw the Euro and British Pound gaining ground against the US Dollar, albeit the latter was hindered by Brexit talks stalling over the weekend earlier.

During Tuesday’s Asia Pacific trading session, a couple of notable economic events will cross the wires. First, Chinese inflation data may offer an insight to third quarter GDP data later this week. Second, the RBNZ will publish its quarterly measure of core inflation (sectoral factor guage). Should the latter show signs of higher prices to come, we may get complementary New Zealand Dollar strength to headline CPI data.

Following the CPI data, the New Zealand Dollar closed at its highest since earlier this month against its US counterpart. NZD/USD has also breached the February 2016 lows as its near-term uptrend picks up pace. From here, a range of resistance between 0.66898 and 0.67207 could be the next key point in determining whether the dominant downtrend from April could be over. 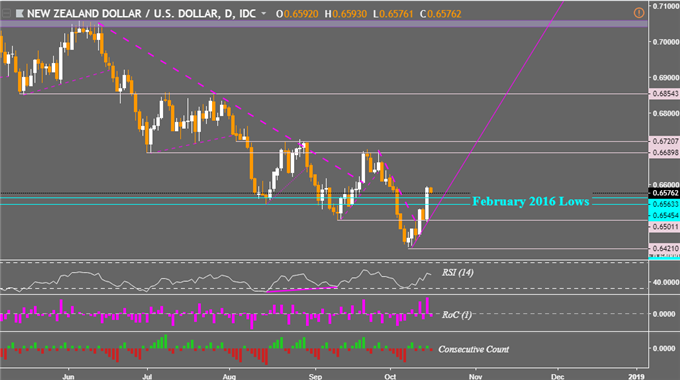 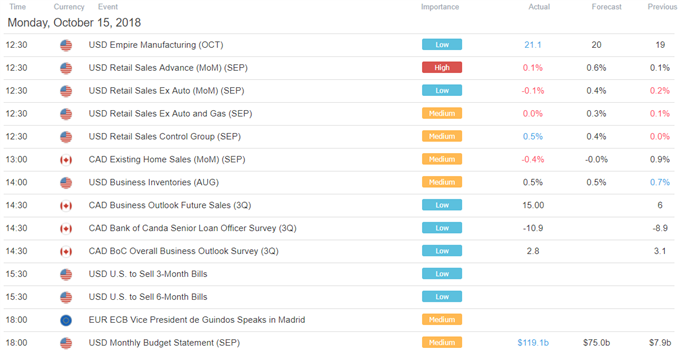