The decline in crude oil prices have shown no significant signs of easing despite the imposition of US sanctions on Iran’s oil sector as investors grow concerned over a potential slowdown that may curb oil demand growth. Alongside this, Iranian sanctions had largely been priced in, while the announcement from the Trump administration to provide oil waivers added to the bearish tone in oil prices.

The US has given 180-day exemptions to 8 oil importers, China, India, South Korea, Italy, Greece, Taiwan and Turkey, which import roughly three-quarters of Iran’s oil. This in turn has initially softened the blow of Iranian sanctions, reducing investors’ fears of a near term supply shock with the US noting that exemptions could possibly be renewed.

Source: Refinitiv. Data showing Iranian oil import data from the first six months of 2018 and announcement of oil exemptions. Updates to follow for other countries.

As mentioned previously, oil production has been surging in recent months from the top 3 largest oil producers (US, Russia and Saudi Arabia). Most notably in the US, who have recorded an increase in crude oil inventories for 6 consecutive weeks amid the US government’s sale of barrels from its Strategic Petroleum Reserves (SPR). As a reminder, back in August, the US DoE stated it August that it would offer 11mbpd of oil for sale from the SPR with the proposed sale from October 1st-November 30th.

As oil prices continue to dip, net long positioning has also tailed off as speculative long positions are at the lowest level since December 2016. Alongside this, speculative shorts have picked up since the beginning of October. However, with net positioning still very long, a further unwind poses a risk of further downside in prices. 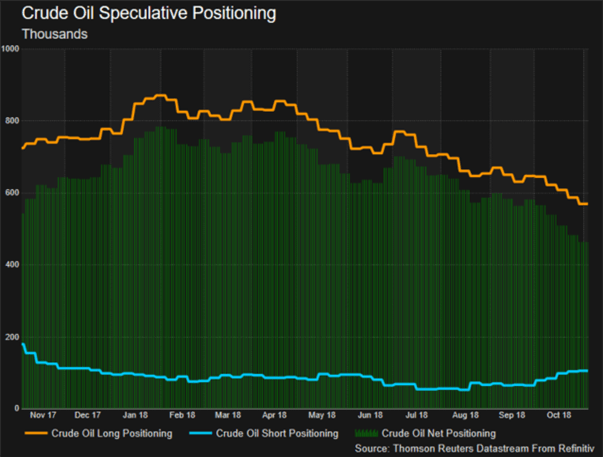 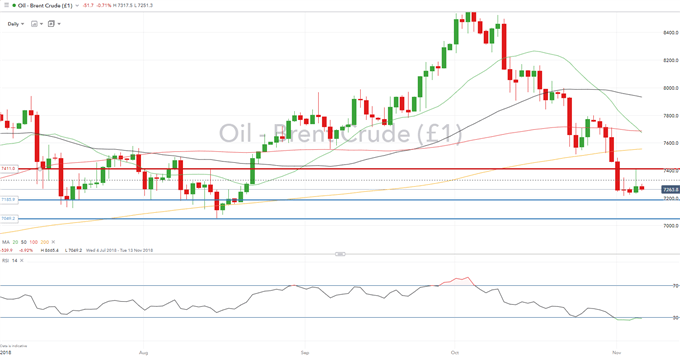 According to IG speculative positioning, US Crude prices may continue to fall. Traders are further net-long than yesterday and last week, and the combination of current sentiment and recent changes gives us a stronger Oil - US Crude-bearish contrarian trading bias.