Most Asia Pacific stocks were lower on Friday, mirroring Wall Street’s Thursday tumble which came in turn on suspicions that US interest rates will be heading a lot higher yet.

The shares of certain regional Apple suppliers slipped too, reportedly thanks to a Bloomberg Business Week report which suggested that Chinese spy chips may have been present in hardware used by that company and Amazon.

The Nikkei 225 was down by 0.5% as its close approached, with stocks in Hong Kong and Seoul also lower. Shanghai managed to buck the trend and post strong gains, while the ASX 200 was also higher, possibly thanks in part to news of a surprise uptick in Australian retail sales. They rose by 0.3% on the month in August, no great shakes but above both the 0.2% gain expected and the previous month’s flat showing.

The US Dollar was supported still further by rising Treasury yields. The prospect of still-higher US interest rates has seen bonds sold off in the last couple of days, taking ten-year Treasury note yields to seven-year highs. USD/JPY held up near peaks not previously seen since November, 2017 and, with the Yen still lacking anything tangible in the way of monetary policy support, the pair’s long uptrend channel looks set to endure. 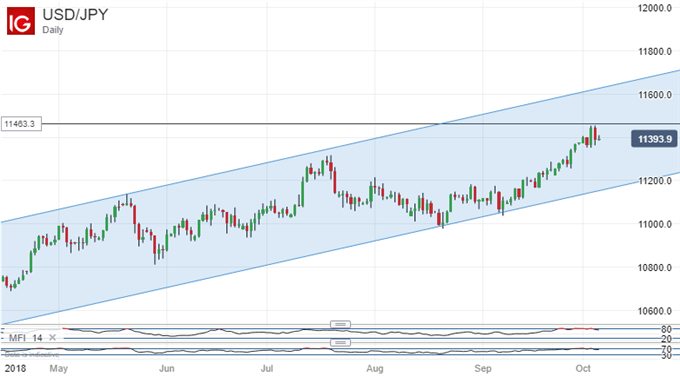 The market is hunkering down for official US labor market release for September which will be released on Friday long after regional investors have shut down their screens. It’s expected to show that a chunky 185,000 nonfarm jobs were created. The unemployment rate forecast to tick down to 3.8%.

Gold prices were steady in the runup whie crude oil prices continued to gain as that market weighed upt he likely effects of US sanctions against major producer Iran.

The rest of Friday offers scheduled news of German producer prices, UK home prices and Canadian employment levels but, with respect to all those venerable data, they’ll be mere warm-up acts for the main US labor market event.