Japanese Yen Stymied as Bank of Japan Stimulus Ploughs On, and On

Join our analysts for live and interactive coverage of all the major Japanese economic data at the DailyFX webinars.

The Japanese Yen is at lows not seen against the US Dollar for nearly two years and looks set to weaken still further, perhaps quite considerably.

Both currencies have played something of a haven role in 2018- sought-after as global trade tensions have risen. However, the US Dollar has become the haven of choice in a straight race as US interest rates continue to rise while Japan’s stagnate below zero. Indeed, it is in monetary policy where we find the case for the Yen at its very weakest. 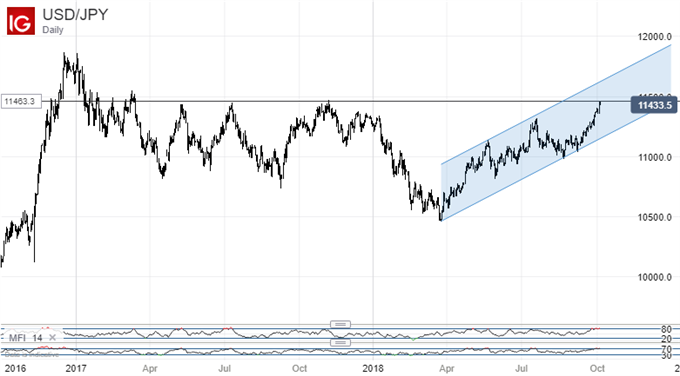 The Federal Reserve has raised rates eight times since it began the gradual withdrawal of its post crisis stimulus in 2015. It is very likely to round off this year with a ninth increase and to continue measured rate rises for as long as the economic data make them plausible.

In some respects, Japan looks desperately unlucky. Overall economic growth is running at two-year highs, job is strong and exports have been resilient to those trade war worries. Look at the Nikkei 225 benchmark for heaven’s sake. It is at highs we have not seen for 27 years.

However, as in many other developed economies, inflation remains stickily low, and it’s that variable which dictates where interest rates are set.

After decades of effort to regain some pricing power in the Japanese economy, annualized Consumer Price Index inflation languishes at 1.3%. The BoJ is still pledged to keep going with stimulus until it hits 2% and stays there sustainably. On current performance, this could mean years of ultra-easy monetary policy and an utter lack of interest rate support for the Yen.

Rumors Have Come To Nothing

Late last year and into the start of this, there were whispers of a change of course. Former BoJ luminaries looked at the Bank of Japan’s balance sheet - swollen to near the size of the country’s GDP by relentless Quantitative Easing - and wondered aloud whether it might not be wise to tighten policy even if inflation was below target.

The return of BoJ Governor Haruhiko Kuroda for an unprecedented second consecutive term back in February may have fueled such talk. After all, it seemed unlikely that the architect of Japan’s super-easy monetary policy would return simply to watch it stagger on in the same old way.

However, it seems that such talk has all come to nothing. The BoJ remains completely committed to ploughing its lonely, uncomfortable furrow until inflation plays ball. It may do so of course, those at the Bank of Japan who like to see a glass as half full may point to the fact that CPI has risen for five months straight and now stands at six-month highs.

A more balanced view might be that the Bank of Japan is ploughing ahead with a monetary policy that has no certain destination, swilling its balance sheet to the point where the risks surrounding it may be impossible to gauge. This seems to be the view, which the markets are increasingly inclined to back. For as long as that is so, USD/JPY is going to be very firmly underpinned.