The US Dollar traded mixed as the new week got underway, first rallying during Asia Pacific trade as it added to Friday’s recovery. Gains were pared amidst broad appreciation in the British Pound during European trade on what appeared to be Brexit-related news. The FTSE 100 and UK 2-year government bond yields rose as Anna Soubry said that a ‘growing number of Tories back a final vote on a Brexit deal’.

She is a member of Theresa May’s Conservative Party which has been under pressure lately after European heads of state grilled her ‘Chequers’ Brexit proposal and essentially made it dead in the water. This arguably increased the odds of a ‘no-deal’ split from the EU which would put the nation under potentially economically damaging WTO-based trading rules.

In the event that Anna Soubry and more members of parliament can gather support for a public vote on the final deal of the exit terms, this could result in a ballot that could essentially act as a moderating influence. Citizens could be given a say in the event Mrs. May pushes forward a no-deal exit and the markets seemed to have cheered such prospects.

With that said, the greenback then rallied during US trade as the S&P 500 and the Dow Jones Industrial declined 0.35% and 0.68% respectively. Haven demand seemed to have poured into the currency as anticipated in the aftermath of China walking away from trade talks with the US amidst the escalation in tariffs on Chinese imports.

Despite the weakness in US benchmark stock indexes, anti-risk currencies such as the Japanese Yen and Swiss Franc declined. This may have been due to the outstanding performance in the US Dollar which was also accompanied with rising local front-end government bond yields. It may have reflected pre-positioning for this week’s Fed rate announcement.

Given the broad weakness in European and US shares, we may see Asia Pacific shares echo weakness during Tuesday’s session. This may offer an opportunity for the Japanese Yen to recover while the pro-risk Australian and New Zealand Dollars remain vulnerable.

Ahead of this week’s RBNZ rate decision, which you may sign up for our live webinar coverage of it, NZD/USD prices have turned sharply lower after stopping just short of resistance at 0.6714. The pair now eyes a near-term rising support line which may hold up for now. A descent through it exposes 0.6563. 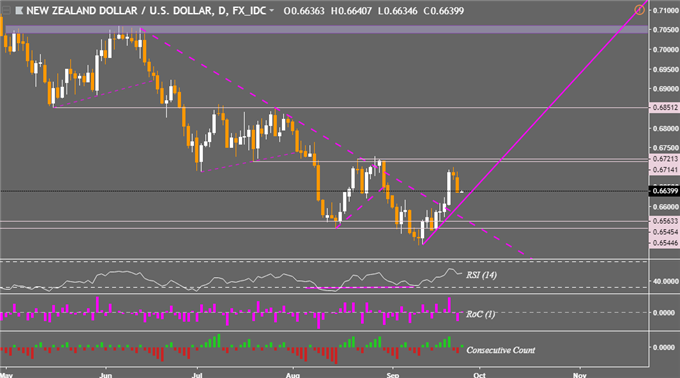