The New Zealand Dollar depreciated across the board as expected when the RBNZ monetary policy announcement crossed the wires. Heading into the decision, the markets were not anticipating a rate change which put their forward guidance as the key potential driver for NZD. In fact, expectations of policy tightening (as implied by New Zealand bank bill futures) point to Q4 2019 as the next move beforehand.

Those bets were largely disappointed as the Reserve Bank of New Zealand left rates unchanged at 1.75% and pushed back forecasts of an increase to Q3 2020. Indeed, local front-end government bond yields tumbled as the central bank released their August statement. The RBNZ anticipates their official benchmark lending rate to remain at 1.75% through 2019 into 2020.

Additional Comments from the RBNZ:

An hour after the announcement, RBNZ Governor Adrian Orrspoke and offered some more details. He said that if growth slows further below potential, they ‘would cut OCR’. Commenting on inflation, Mr. Orr noted that it remaining low gives them scope to keep rates lower for longer. Overall, the relatively dovish RBNZ offered the Australian Dollar upside momentum and AUD/NZD rose as much as 0.8% in the aftermath. You can see the reaction below: 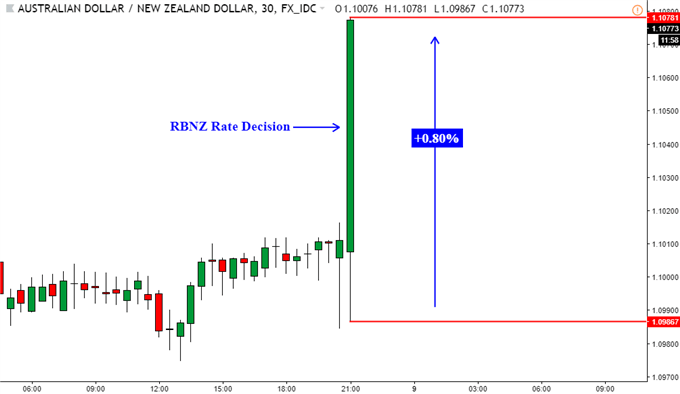 The US Dollar depreciated during the second half of Wednesday’s trading session. Its fall coincided with a decline in crude oil prices, the S&P 500 and with US government bond yields. This suggests an overall deterioration in market mood. Keep in mind that the greenback now boasts the highest yield in the majors FX spectrum. Thus, it can now be more prone to a deterioration in risk trends

This occurred as trade tensions between the world’s largest economies increased. After the US imposed $16b in Chinese import tariffs yesterday, China retaliated with imposing 25% in additional tariffs on $16b in US goods on Wednesday. This is set to take effect on August 23. Sentiment-linked oil prices were unable to capitalize on a less-than-expected decline in weekly US crude oil inventories. Those stockpiles contracted 1.3m bbl instead of API estimates calling for a 6.02m contraction.

A relatively quiet economic data offering during Thursday’s Asia/Pacific region once again places risk trends as the key driver for markets. The deterioration in sentiment from the US session could echo into local benchmark indexes, sending them lower. This may allow the anti-risk Japanese Yen to gain while the sentiment-linked Australian Dollar rises. NZD could still be weighed down in the aftermath of the RBNZ. 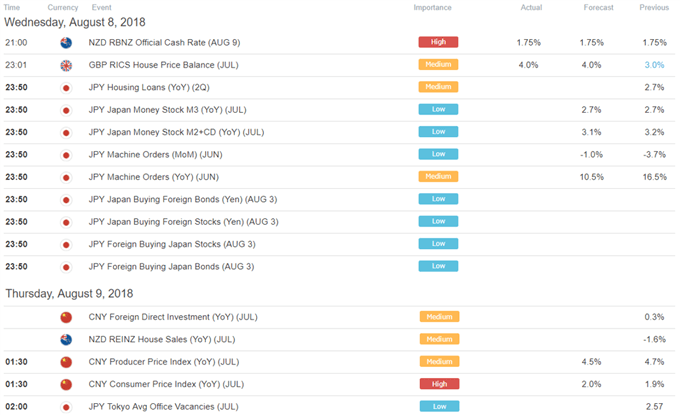 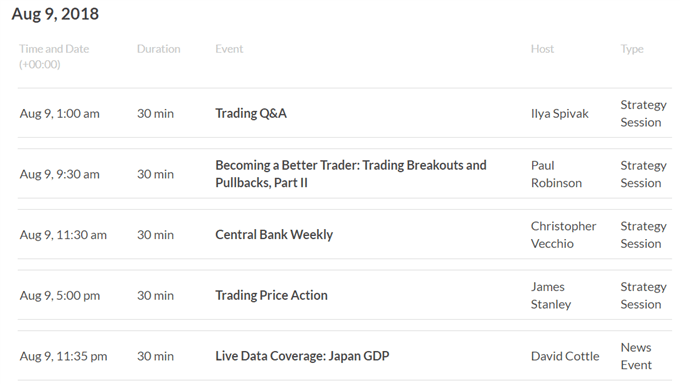 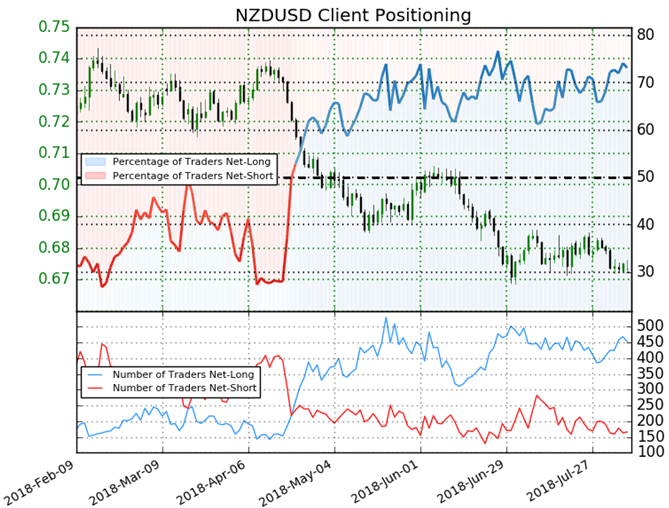 Retail trader data shows 73.2% of NZD/USD traders are net-long with the ratio of traders long to short at 2.73 to 1. In fact, traders have remained net-long since Apr 22 when NZD/USD traded near 0.72691; price has moved 7.3% lower since then. The number of traders net-long is 3.2% lower than yesterday and 10.8% higher from last week, while the number of traders net-short is 5.1% lower than yesterday and 11.7% lower from last week.