Most Asia/Pacific benchmark indexes traded higher, echoing gains from the US session. There on Wall Street, the S&P 500 and NADAQ Composite rose 0.50% and 0.31% respectively. Heading into the conclusion of Wednesday’s Asia session, Japan’s Nikkei 225 rose 0.48%. It was led by industrials and telecommunication. South Korea’s KOSPI and Australia’s ASX 200 were up 0.30% and 0.32% each.

The exception came from China’s stock market, where the Shanghai Composite declined about 0.32 percent. Heading into the trading session, the US imposed the rest of its $50b in Chinese import tariffs. This amounted to $16b and is expected to go into effect on August 23rd. With that in mind, local shares may have not taken the news well as the two largest economies inch deeper into trade spats.

Looking at currencies, the Australian Dollar edged cautiously higher following a speech from RBA Governor Philip Lowe. It seemed to be buoyed also by Chinese trade data in which both import and export growth beat expectations in the month which US tariffs went into effect. Meanwhile, the New Zealand Dollar also rose after local 2-year inflation expectations rose for the third quarter from the second.

Over the remainder of the day, a top tier event risk on the economic calendar will be the RBNZ rate decision. Amidst softer inflation and jobs data, the central bank may offer a relatively dovish tone and send the New Zealand Dollar lower. Crude oil prices will look to official EIA weekly inventories. Recent API estimates points to a larger-than-expected contraction at 6.02m bbl and that could send the commodity higher.

We released our 3Q forecasts for Crude Oil, US Dollarand the Japanese Yen in the DailyFX Trading Guides page

While NZD/USD saw some gains during Wednesday’s Asia session, the pair still remains in consolidation mode when looking at the bigger picture. It seems to have failed pushing below near-term support at 0.6716, which is a combination of the mid-July and early-August lows. From here, near-term resistance appears to be around 0.6851 or just of the upper boundary of NZD/USD’s recent range. 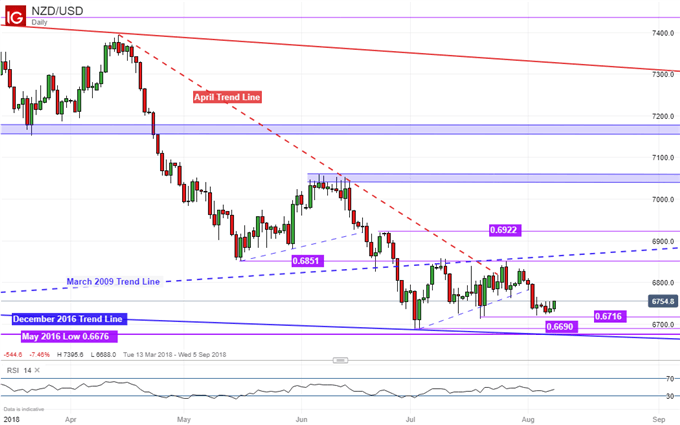 NZD/USD and other equities Trading Resources: