Third Quarter Forecasts for Currencies, Commodities and Equities are out!They can provide useful insight to enhance your trading opportunities.

Shortly after market-close on Wednesday, US President Trump tasked trade officials to consider raising tariffs on $200 billion worth of Chinese goods. The proposal would see the proposed tariffs climb from 10% to 25%, a significant escalation in the trade war. The news was first received by markets early Wednesday morning but was not officially released until post-market Wednesday.

Read A Brief History of Trade Wars for insight on how the conflicts may develop.

The move came as talks between the US and China have stalled in recent weeks. President Trump dismissed the initial 10% tariffs as weak and said he remains open to negotiation with Beijing. Senior administration officials said they would ask for industry comments on the two potential tariff options and that a final decision is not expected until September at the earliest. At this time, the proposed $16 billion in extra tariffs on the initial wave of $50 billion has not yet been resolved.

The announcement follows a couple of worrisome results on important economic indicators for the US economy. Tuesday’s release of consumer confidence and Wednesday’s miss on ISM manufacturing both point toward rising risk despite relatively rosy results. Together, the economic indicators and increased tariffs on China could prove to be enough to stall equity growth and shift investor’s capital elsewhere. Similarly, the escalation from the Trump administration could prompt China to further explore a currency war. USD/CNH has appreciated roughly 4.5% year-to-date. 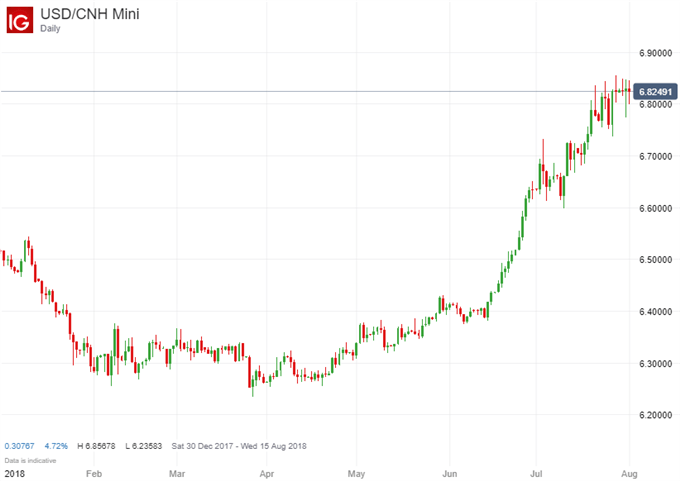 The proposed tariff escalation comes days after President Trump and European Commission President Juncker agreed to halt tariff escalation and NAFTA talks with Mexico seem near resolution. The “cooled” fronts in the trade war allow the US to focus more heavily on China in the coming weeks.