- Euro confused by a mix of EU Summit migrant proposals and talk that the ECB may tinker with QE re-investment.

The recent EURGBP grind higher has faltered, and is now stuck between two conflicting technical indicators, despite some positive news from the recent EU Summit that an agreement has been reached on the migrant issue that threaten to open further cracks within the European Union. The single currency took the news positively and pushed higher but then started to give back gains due to the lack of clarity and detail in the announcement. The euro then inched lower after a report hit the wires – not officially confirmed – that the ECB is considering buying more longer-dated bonds from next year when reinvesting coupons and redemptions from the EUR2.5 trillion quantitative easing program. This twist – comparable to the US Operation Twist programs – is likely to keep longer-dated rates lower, undermining the single currency.

On the other side of the pair, Sterling got an unexpected boost when the final UK Q1 GDP figure beat expectations - +0.2% vs +0.1% - giving credence to recent BoE talk that the UK economy is pulling back from a weak, weather-hampered start to the year.

EURGBP broke out of its recent range to the upside Thursday and now sits between two technical levels. A strong break and close above/below these levels is needed for short-term direction. On the upside, the 38.20% Fibonacci retracement level (August 2017 – April 2018 move) at 0.8883 protects further retracement at 0.8964 and may be difficult to break. On the downside, the 200-day moving average at 0.8809 protects 23.6% retracement at 0.8783 and again may be prove resilient. On the wide, it looks like a EURGBP trading range of 0.8783 to 0.8964 may be forming. 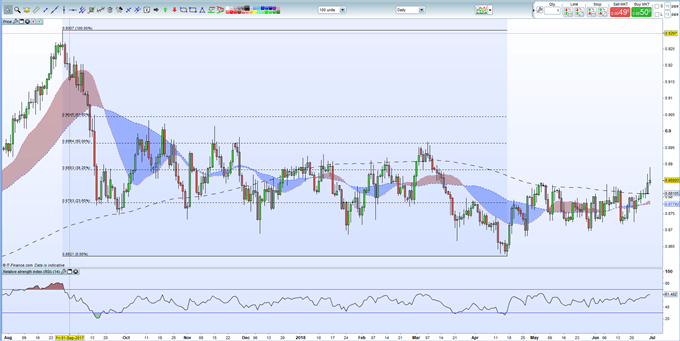 What’s your opinion on the EURGBP?

Share your thoughts with us using the comments section at the end of the article or you can contact the author via email at Nicholas.cawley@ig.com or via Twitter @nickcawley1