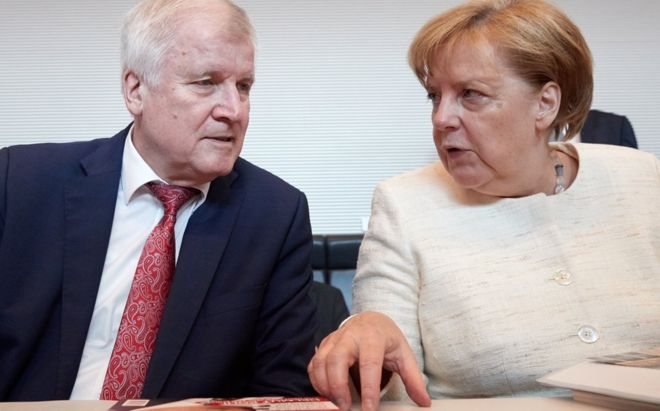 If there is one thing that had been made apparent by yesterday’s 2 big figure plunge in the Euro yesterday. Is that nothing lasts forever, whether that’s ECB QE, or Chancellor Merkel’s leadership. Amidst the surprise announcement by the ECB to detail its QE exit and alter its rate guidance, a report had surfaced that the German coalition that took 6 months to form could be on the brink of collapse with Bavarian sister party CSU threatening to break away due to different opinions over immigration policy.

Given the upcoming Bavarian regional election in October, which has the right wing AfD party gaining in the polls, threatening the CSU’s majority, the latter has favoured a tough immigration policy stance. Bavarian Interior Minister Seeehofer had put forward a plan to turn back some refugees at the German border, however, this plan had been refused by Chancellor Merkel, while the SPD party had warned that the coalition would if Merkel had accepted the CSU’s demands.

Chancellor Merkel will most likely have discussions over the weekend to find a solution and reach a last-minute compromise with the CSU. Although, failure to do so in which the CSU deem any immigration solution as too soft, the Interior Minister could utilise his ministerial powers impose new and tougher immigrations rules. This would not only leave Merkel’s majority vulnerable but risk a split away between the CDU and CSU, raising the threat of a no-confidence vote for Merkel or snap elections, which would likely see the Euro pressured.

According to the latest CFTC data heading into June 5th, net Euro longs are still relatively high, valued at $13bln. This suggests that there is further room for a larger unwind of long positions, increasing the risk of a greater fall in the Euro, which could be exacerbated as EURUSD presses for lower levels.

Additional reports on the Euro

- EURUSD May Fall Sharply in the Months Ahead