The Euro and the Dax saw a muted reaction following the release of the latest Eurozone trade data. The trade surplus widened to EUR 26.9bln from EUR 18.9bln in February, slightly narrower than the EUR 28.5bln a year ago, as Eurozone imports and exports declined by 2.5% and 2.9% respectively. Subsequently, this adds to the evidence that trade tensions may be reining in global business activity, which had also been noted by the WTO recently who stated that trade tensions may be starting to hold back global trade.

Will There be a Trade Deal?

Overnight, reports had noted that China had offered the US a trade agreement worth the demanded USD 200bln on more purchases of US exports (current US deficit with China is roughly USD 350bln). However, this had later been denied by the Chinese Foreign Ministry who noted that talks are still ongoing. While it has not been made apparent that there has been a significant amount of progress in regard to a trade deal, this does suggest that both parties are looking for a resolution, which if successful could suggest that tariffs will not be imposed, providing good news for world trade and thus global growth. 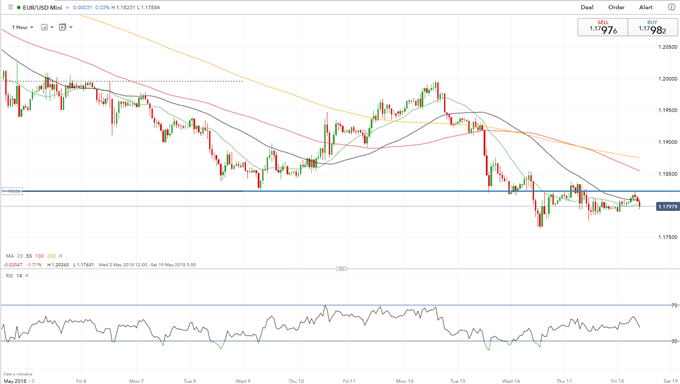 EURUSD continues to remain anchored around 1.18 where there are 1.8bln worth of option expiries, as such, with little in the way of significant data releases, this could magnetise the pair. Euro bears continuing to look for a close below the 1.1790 76.4% Fibonacci Retracement (1.1553-1.2256), in turn the failure to close below could imply that EURUSD may be at risk of a short squeeze as Euro bulls find a base above 1.18. Widening US-German spreads and uncertainty over Italian politics to keep upside in the pair capped.