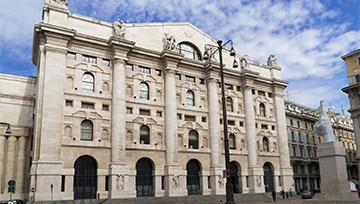 - In Italy, the anti-establishment 5-Star movement and the anti-immigrant League now seem likely to form the next government.

- That has sent 10-year Italian government bond yields to their highest for seven weeks and knocked Italian stock prices lower.

News that a new coalition government in Italy is likely to be formed by the anti-establishment 5-Star movement and the anti-immigrant League has hit the prices of Italian assets as both parties favor fiscal stimulus.

The FTSE MIB stock-market index was last trading down 1.4% Thursday, while the yield on the benchmark 10-year Italian sovereign bond was up by nearly five basis points at 1.924%, its highest level since March. Moreover, both stock and government bond prices could fall further as the budget deficit rises. A move to leave the Euro-Zone is also possible, though unlikely.

However, the two parties may yet fail to reach agreement, in which case a more market-friendly caretaker government could be formed. New elections remain a possibility too. On the other hand, Italian spreads over Germany have so far widened only modestly and could widen much further if the two parties reach agreement and begin to flesh out their tax and spending plans.