Asia AM Digest: Markets in Turmoil on Trade War Fears, Cohn Out

Tuesday was a day of broad confidence in the markets thanks to a couple of developments both inside and outside of the US. This was mainly thanks to news that the US congress is considering legislation to block Trump’s tariffs and reports that North Korea is willing to denuclearize. In short, anti-risk currencies such as the Japanese Yen performed poorly while those on the higher-yielding spectrum did much better like the Australian Dollar.

Towards the end of the session, RBA’s Governor Philip Lowe presented a speech and noted that there is “no case for a near-term policy adjustment”. His comments crossed the wires after their March monetary policy announcement in which rates were left unchanged and the rhetoric against Aussie Dollar strength was not increased. However, in Mr. Lowe’s speech, he noted that a lower currency would help inflation and unemployment. The Australian Dollar didn’t move much on the comments, but volatility wasn’t low for much longer.

Wednesday’s session almost immediately started with fireworks. News crossed the wires that Donald Trump’s top economic adviser Gary Cohn would resign. Earlier in the day, newswires reported that he was planning to resign if the administration went ahead on imposing tariffs on steel and aluminum imports.

The markets didn’t take the news kindly, the Japanese Yen gained across the board while the Canadian Dollar suffered. S&P 500 futures eventually tumbled more than 1.0%. This could have been due to a reversal in confidence that was built up earlier in the day on hopes that trade wars could be avoided.

Only an hour had passed after these developments when more trade-related news crossed the wires. The US is said to be considering broad curbs on Chinese imports and investments. This was reported to be in response to alleged intellectual-property theft. Details showed that these tariffs could be imposed on items such as shoes and consumer electronics. The Australian Dollar did not take the story well, further plunging in the aftermath.

Looking ahead, Australia’s fourth quarter 2017 GDP figures will cross the wires. Economists are calling for growth rates to slow down slightly. Our Analyst David Cottle will be begin covering the release 15 minutes before the data crosses the wires here. 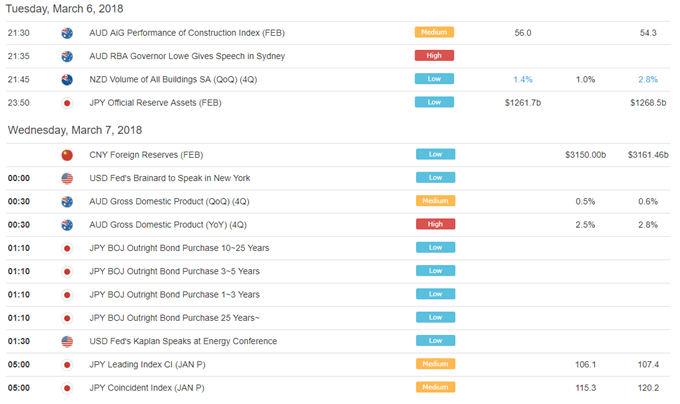 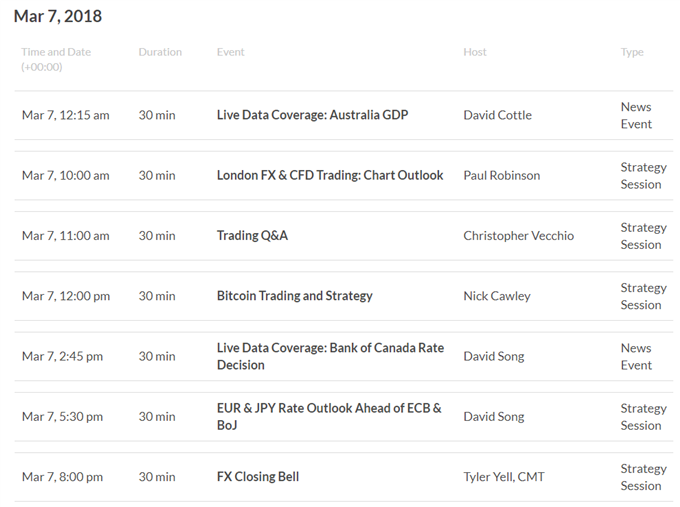 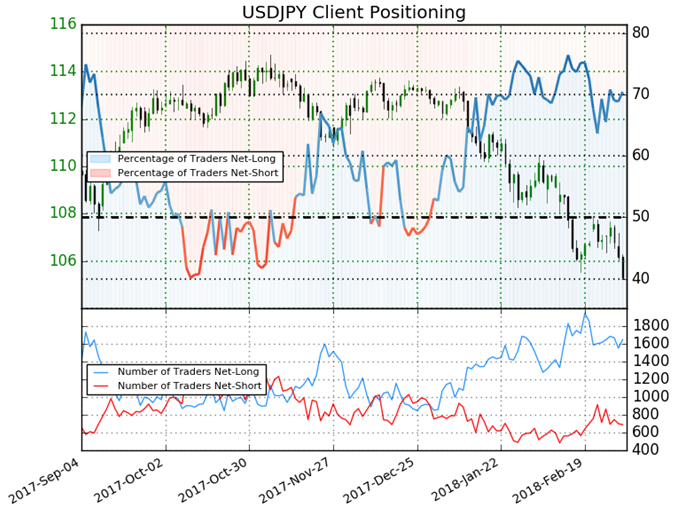 Retail trader data shows 70.4% of USD/JPY traders are net-long with the ratio of traders long to short at 2.38 to 1. In fact, traders have remained net-long since Dec 29 when USD/JPY traded near 113.0; price has moved 6.8% lower since then. The number of traders net-long is 3.0% lower than yesterday and 2.2% higher from last week, while the number of traders net-short is 4.9% lower than yesterday and 24.0% lower from last week.