The European Union proposed a Brexit draft containing significant detail for the withdrawal of the United Kingdom in the coming months. The draft, outlined in 120 pages, was ultimately rejected by British Prime Minister Theresa May however, leading to an abrupt tumble from the Pound. The draft was rejected by May primarily over passages regarding the land border between Northern Ireland and the UK. The bill proposed Northern Ireland would effectively remain in the EU, creating a hard border between Britain and Northern Ireland.

“The draft legal text the commission have published would, if implemented, undermine the UK common market and threaten the constitutional integrity of the UK by creating a customs and regulatory border down the Irish Sea, and no UK prime minster could ever agree to it,” May said.

Although the draft proposed by the EU was swiftly rejected, negotiations will continue. European Chief Negotiator for the the EU, Michael Barnier, said that the document will be circulated among the 27 other EU nations and the European Parliament’s Brexit steering group for revision and agreement before it is sent to the negotiation table. Theresa May said UK negotiators will work with the EU to translate talks from December into legal form. The focus now shifts to Friday when Theresa May is set to deliver a speech outlining her government’s plans for Brexit, a closely watched position given the recent reports of infighting over the country’s position in the negotiations.

With relations between the two parties growing more strained than they already were, the Pound sank approximately 130 pips relative to the Dollar and 90 pips versuso the Euro. Friday’s next public update on the state of the negotiations amid such tension – and with the clock counting down until the Article 50 period closes – can render another strong shove to the Sterling. If the counter proposal is deemed equally unacceptable by their EU counterparts, the effects on currency seen today will likely be echoed on Friday. 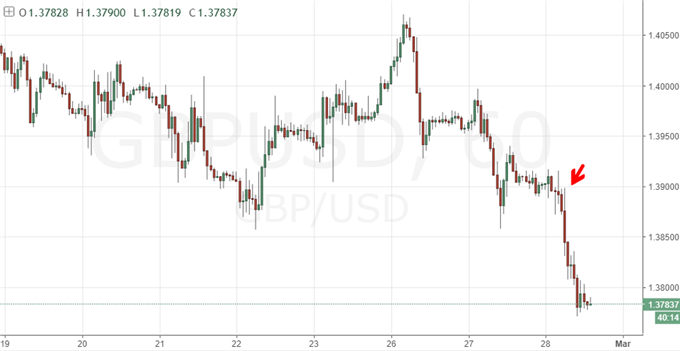