- Following a partnership with MoneyGram, Ripple’s XRP token has rallied 38% from today’s low

- Over the past week, rejection for trade by Coinbase and talk of a South Korea ban led to a selloff

- New to the cryptocurrency market? Check out the new Introduction to Trading Bitcoin guide

Ripple’s XRP token, formerly known as “Ripple” may has gotten a much needed boost following reports that MoneyGram has begun testing the digital currency in a new partnership with Ripple. MoneyGram is a global money transfer service that is available in 200 countries and territories in approximately 350,000 locations. In 2016, MoneyGram sent nearly $600 billion in cross-border payments.

The new partnership with Ripple has positive implications for Ripple’s XRP which has come under scrutiny recently. Last week, we reported that Nathaniel Popper publicly criticized the viability of XRP claiming that banks are not adopting the technology. This lead XRPUSD on a free-fall of about 35% from its all-time high of $3.31.

Another hurdle for the quickly rising cryptocurrency was the headline last week that exchange Coinbase was rejecting the notion that they were preparing to offer Ripple for trade alongside Bitcoin, Litecoin and Etherium. Yesterday, a uniform pressure arose for the asset type – from Bitcoin to Ripple – when its headlines printed rumors that South Korea, one of the largest markets for cryptocurrency trading, was readying plans to ban the products.

Ripple has released an official statement explaining the terms of the partnership; “MoneyGram will access and use XRP, the native digital asset of the XRP Ledger, in their payment flows through xRapid, Ripple’s on-demand liquidity product.” MoneyGram is hoping that Ripple’s technology will increase the efficiency of their payment services. 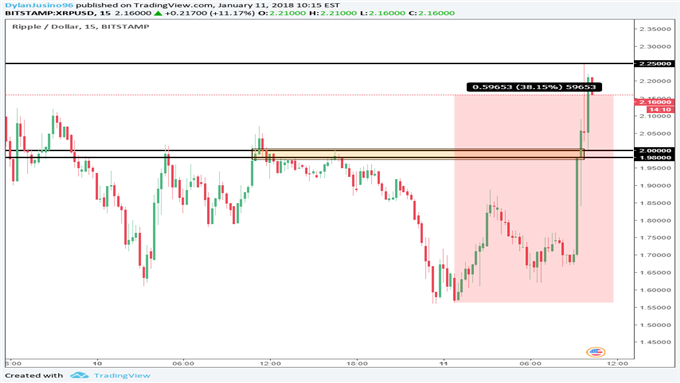 While XRPUSD is still well off from its all-time high, the MoneyGram news has sparked the biggest move in the cryptocurrency market today. In less than 20 minutes, XRPUSD rallied past two key resistance levels, 1.980 and 2.000. At the time that this was written XRPUSD has found resistance at 2.25 and traded around 2.19. This marks an impressive 38% move from today’s low.