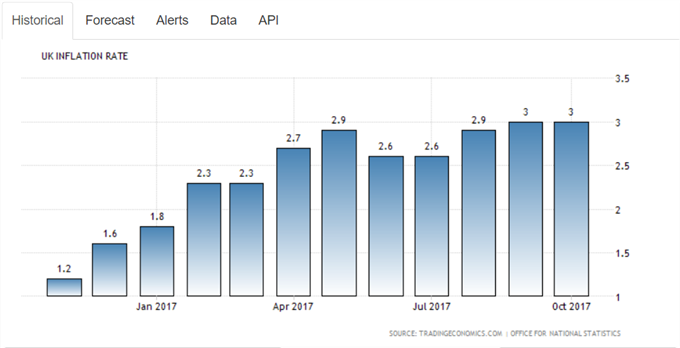 - BOE says whatever happens with Brexit, the central bank will be able to balance growth and inflation.

- GBPUSD remains at the top end of the day’s trading range.

Check out our new Trading Guides: they’re free and have been updated for the fourth quarter of 217

Speaking at the Bank of England’s Future Forum – an annual event to discuss the bank’s role in serving society - Governor Mark Carney said that while the UK’s departure from the European Union posed risks, the BOE would be ‘nimble enough’ to move monetary policy to bring inflation back to target while continuing to support the economy.

Inflation in the UK has been above target (around 2%) since February of this year as the effects of a weaker Sterling imported inflation into the UK. The central bank hiked interest rates on November by 0.25% to 0.50%, the first rate hike in a decade, in an effort to control overheating consumer price pressure. Further hikes are not expected until mid-late 2018 as the BOE continues to monitor tepid UK growth.

Governor Carney also added that it was important what Brexit deal the UK finally negotiates and the timing of the deal, on the same day that it was rumored that European Council President Donald Tusk would recommend that Brexit talks progress towards the second phase when he meets UK PM Theresa May on Friday. This recommendation however would be contingent on the UK meeting the EU’s requirements on the exit bill, the Northern Ireland border and EU/UK citizen’s rights. Earlier today, various media outlets suggested that the UK would be willing to pay an additional GBP 20 billion towards the exit bill along with the original GBP18 billion promised by the PM at her recent speech in Florence.

GBPUSD has remained resilient over the last few days as market participants continue to believe that progress will be made in Brexit talks. Any confirmation that the EU will allow the UK to start post-Brexit trade talks will push GBP back towards the 1.3300/1.3400 level and potentially higher. However, any further delays in talks will leave GBP vulnerable to a sell-off, with a close below the monthly low of 1.3040 opening the way lower. DailyFX analyst David Song looked at the latest GBPUSD set-up here.