Bitcoin Surges then Sinks as 'Segwit2x' Fork is Called Off

- Controversial ‘Segwit2x’ fork called off as Bitcoin community lacked consensus; was scheduled to go into effect in approximately eight days.

- Bitcoin (BTCUSD) trades in over $800 range around announcement.

Bitcoin has seen another burst of volatility today after news emerged the planned Segwit2x fork was called off. The Segwit2x fork, otherwise known as “2x”, was scheduled to go into effect in approximately eight days. 2x would change certain overarching rules governing Bitcoin, in particular that blocks passed around the network and stored on the blockchain would increase in size from 1MB to 2MB.

Opponents of the move had issued concern that the shift in protocol would effectively transfer more power into the hands of miners (a network that has the hardware to unlock the block rewards) and businesses (companies that provide storage and usage abilities for cryptocurrencies). In effect, 2x would be centralizing power over Bitcoin that would go against its founding principle of being decentralized.

Accordingly, with just over 30% of Bitcoin users reportedly agreeing that they would adopt the change and move from the current blockchain over to the new one governed by 2x, supporters of the plan called off the intended fork, saying “Unfortunately, it is clear that we have not built sufficient consensus for a clean blocksize upgrade at this time. Continuing on the current path could divide the community and be a setback to Bitcoin’s growth.” 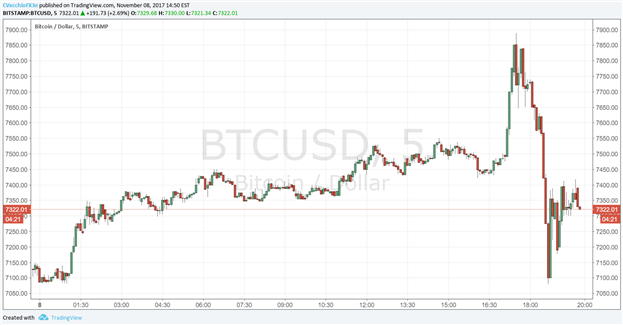 Following the news, Bitcoin rallied sharply from near $7500 to a fresh all-time high just below $7900. Yet price was quick to revert, sliding back to session lows just under $7100 before settling near $7322 at the time this article was written.

Given that cryptocurrency markets are still in their infancy (relative to equity markets in developed countries, for example), action today around the 2x cancellation makes for an interesting study in “price discovery.”

From a behavioral perspective, the initial swing higher comes as market participants are enthused by the idea that this controversial change in protocol won’t be implemented, but then the drop comes as those who were holding Bitcoin hoping for a ‘dividend’ of sorts – like after the Bitcoin Cash or Bitcoin Gold forks – prove disappointed by today’s news.