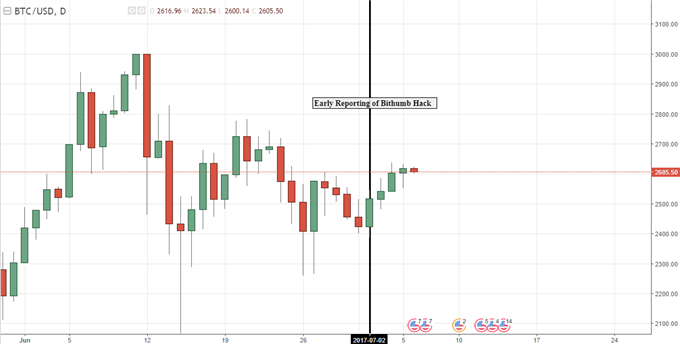 Bitcoin Unphased by Yet Another Exchange Security Breach

Check out our analysts’ 3Q 2017 market forecastsfor the Dollar, Euro, Pound, Equities and Gold on the DailyFX Trading Guides page

The Bitcoin to US Dollar exchange rate was little changed following reports that one of the largest Ethereum and Bitcoin exchanges, Bithumb, was hacked late last week. The exchange issued a statement clarifying that the hackers used an employee’s work laptop to gain access to users’ passwords and information, as opposed to recent hacks which have directly compromised cyber-security backstops.

News of the hack did not have a serious impact on price action, as the Bitcoin to Dollar exchange rate appreciated nearly 10 percent this week amid reporting focused on the event. Despite clarifying that the exchange’s ability to withstand cyber-attacks is still intact, many users lost funds and client information was compromised. This hack also comes at a time where Bitcoin and cryptocurrency acceptance is growing, but its viability and sustainability are being challenged.

Japan and Korea have recognized the cryptocurrency as a legitimate medium of exchange and major retailers and companies have already begun transacting in BTC. However, agencies like the SEC continue to worry about the safety of bitcoin and similar instruments. The financial regulator has already rejected two prominent proposals for a cryptocurrency-based ETF.

Below is a list of a few major cryptocurrency exchange cyber-attacks in recent years.