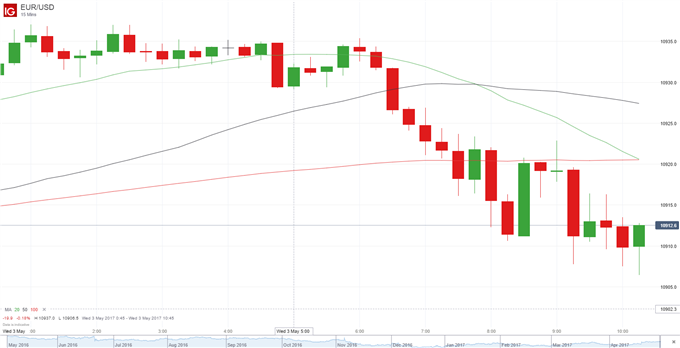 - However, the Euro has shrugged off the data.

The Euro-Zone recovery is continuing to strengthen, with the economy growing by 0.5% in the first quarter of this year, beating the previous 0.4%, according to new data from Eurostat released Wednesday morning.

However, the Euro has shrugged off the data, just like it did with encouraging German labor market statistics earlier. Despite the European economy entering a period of stronger growth, it’s unlikely to result in any change in tack from the European Central Bank’s firmly dovish posture.

What’s more, fears of political instability and debt crises have yet to fully recede. Next up for the Euro is tonight’s televised debate between Emmanuel Macron and Marine Pen, ahead of the final round of the French Presidential election vote on Sunday. Macron looks odds on to become France’s next president – a result that is likely to boost the Euro. Any shift towards Le Pen may therefore weigh somewhat on the single currency.