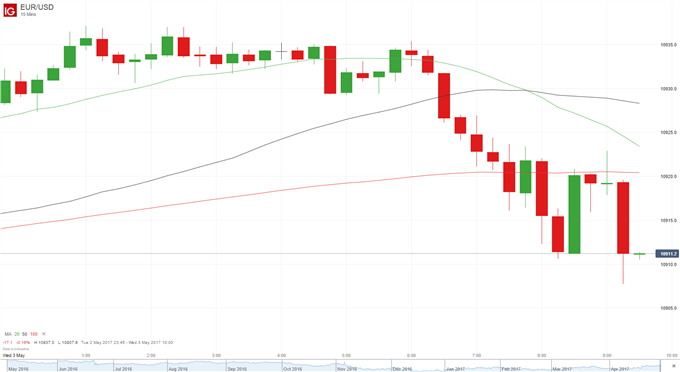 - Euro shrugs off the positive data.

Germany’s unemployment number shrank a further 15,000 in April, according to a data release by Germany's Federal Statistics Office Wednesday morning. That’s better than the 11,000 drop expected by analysts, and the seventh consecutive monthly drop in the country’s jobless numbers, and thus a further boost to optimism about the health of the Euro-Zone’s largest economy. February’s drop of 30,000 was revised to 29,000. Germany’s unemployment rate, meanwhile, held steady at a record low of 5.8%, as expected.

The positive data are, however, unlikely to affect the Euro. They are likely to increase the calls from within Germany for the European Central Bank to be more confident about the currency area’s economic prospects. Last month, Bundesbank President Jens Weidmann was the latest senior German figure to demand the ECB bring an early end to its quantitative easing program. He said the central bank should “take its foot off the gas” soon.

But ECB President Mario Draghi has long stressed the fragility of recent price rises, which were driven mainly by volatile energy prices, and is stubborn in his view that underlying inflation in the region is not yet strong enough to justify a shift in policy.