- Both the German ZEW survey for March and Euro-Zone industrial production figures for January missed expectations.

- However, the Euro held steady after the data.

The ZEW survey of economists and analysts has painted a less bright than expected picture of the German economy this month, with its measures of both economic sentiment and current conditions coming in below consensus forecasts.

Economic sentiment in March was 12.8, below the 13.1 predicted but above the prior month’s 10.4. Similarly, current conditions came in at 77.3, below the expected 78.0 but above February’s 76.4. Yet the Euro crept up on the data against its principle rivals. 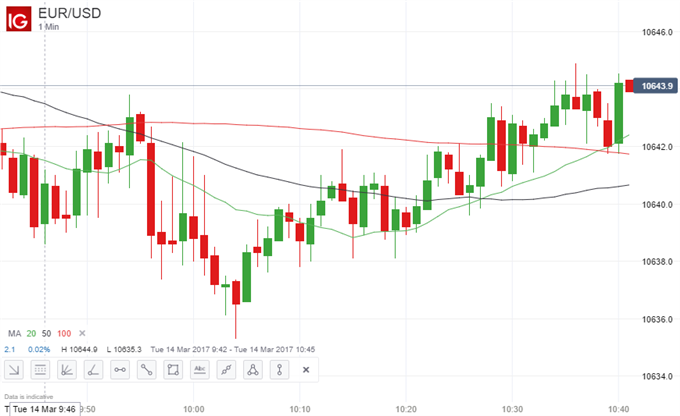 There was disappointment too in the Euro-Zone industrial production statistics for January, with a month/month increase of 0.9%, below the expected 1.3%. The previous month’s figure was revised down to minus 1.6% from the previously-reported minus 1.2%. On a year/year basis, Euro-Zone industrial production was up 0.6% rather than the predicted 0.9% and the December number was revised down to 2.0% from 2.5%.

“The fact that the ZEW Indicator of Economic Sentiment only shows a slight upward movement is a reflection of the current uncertainty surrounding future economic development,” commented ZEW President Professor Achim Wambach.

“With regard to the economic situation in Germany, no clear conclusions can be drawn from the most recent economic signals for January 2017. While industrial production and exports witnessed a positive development, the figures for incoming orders and retail sales were less favorable. The political risks resulting from upcoming elections in a number of EU countries are keeping uncertainty surrounding the German economy at a relatively high level,” he added.