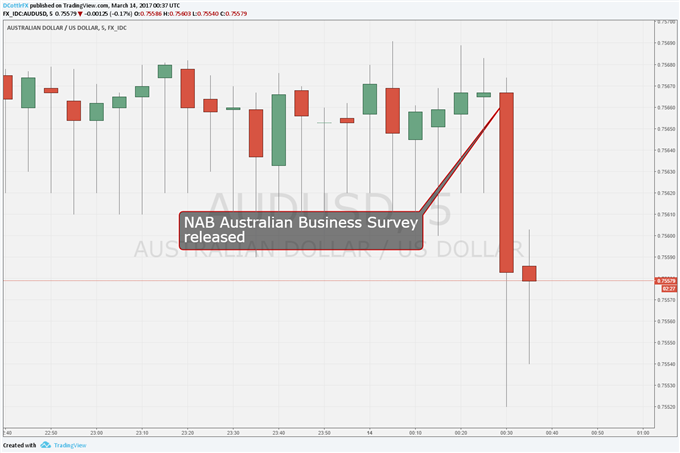 The Australian Dollar fell on Tuesday as a snapshot of business conditions fell short of its previous vigor.

The business confidence indicator for February from major local lender National Australia Bank came in at 7. January’s reading had been 10, itself a very big jump from the previous month. However, on the current showing it doesn’t look as though that confidence has been sustained.

The business conditions indicator slipped by far more, to 9 from the 16 registered in January. Admittedly that burst of new-year optimism had taken the series to a ten-year high, and it remains very much above its long-run average of 5.

NAB called business conditions still “quite lofty,” with employment conditions “notably” better this year than last. It still sees solid growth for the Australian economy, but worries about retail-sector weakness.

Still, the Australian Dollar slipped. AUD/USD fell to 0.75519 in the immediate aftermath, from 0.75688 just before

This market like all others is fixated on the US Federal Reserve. It will set monetary policy this week at a meeting which is widely expected to conclude with an interest-rate hike. Last week’s official US labor data were seen in the markets as the final hurdle to a move, and they were negotiated with some aplomb as non-farm payrolls rose convincingly.

Meanwhile Australian interest rates are seen on hold, possibly for the remainder of this year and into next.

The year’s first quarter is getting old now, how are the DailFX analysts’ forecasts holding up?