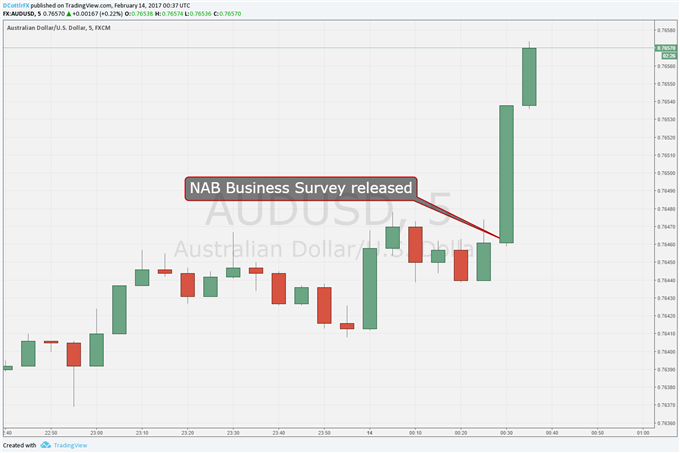 The Australian Dollar got a lift against its US cousin on Tuesday thanks to a big rise in business sentiment.

The National Australia Bank’s Business Survey confidence index came in at 10 for January, very much better December’s 6. The survey’s assessment of business conditions shot up to 16. That also trounced the previous month’s score of 10, which in any case had been revised down by a point.

Shot in the arm: AUD/USD

These numbers provide comfort for those who hope that Australia’s shock growth contraction in the third quarter of 2016 was just a blip, and that the economy has recovered momentum since. The Reserve Bank of Australia subscribes to the view that it has. Indeed it said so again last week in its quarterly Statement on Monetary Policy.

There has been other good news for Australia in recent days, perhaps most notably China’s extraordinary trade numbers which bode very well for the Pacific nation’s vast commodity export machine. However, doubts will probably linger about the disparity between that export sector and the country’s own internal demand. There the picture has been far patchier.

NAB itself said that while the survey points to an improving domestic economy, some caution is warranted. It cited “diverse and rapidly changing seasonal influences” and the timing of China’s Lunar New Year holiday. It also said that utilization rates remained at or below long term averages across most industry groups.

Sure enough, it also said that ongoing weakness in retail conditions raised concerns about the underlying strength of household consumption.

There is also the question of interest rate disparity with the US Dollar. US rates are expected to rise this year, perhaps by as much as 0.75 percentage points. Australian rates by contrast are at record lows and seem likely to remain there.

Have you often wanted to know more about trading the foreign exchange markets? Take a look at the DailyFX Trading Guide.