February US NFPs Surge, but US Dollar Walks Away Disappointed

- Given the February ISM Services and ADP Employment reports, today’s headline NFP jobs data is a bit of a letdown.

The US labor force continued to show signs of strong growth in February, with the headline Nonfarm Payrolls figure coming in at +235K, easily beating expectations of +200K. The January reading was revised slightly to +238K from +227K; overall, however, the net-two month revision was only +9K.

While today’s reading of +235K is on the high end of estimates, it’s a bit of a letdown from our perspective given other data points ahead of the release. The February US ISM Services/Non-Manufacturing index increased to 57.7 (from 56.5 previously) while the February ADP Employment Change showed jobs growth of +298K – the best reading since April 2014. Using a 10-year rolling model, the ADP report and the ISM Services report account for 92% of the changes in the NFP figure (R^2 = 0.92), and, in sum, these proximal trackers of the US labor market were suggesting a pace of jobs growth north of +250K.

Other parts of the report painted an improving picture of labor force strength. The labor force participation rate edged higher, up to 63.0% from 62.9%, making the improvement in the unemployment rate (4.7% from 4.8%) and the underemployment rate (9.2% from 9.4%) all the more impressive. Wage growth held steady at +2.8% (after the January figure was revised higher), which matches what was seen in December 2016, at the time the highest rate of wage growth in seven-years.

As far as rate hikes are concerned, this report is a mixed bag. Fed funds rate expectations continue to price in a 100% chance of a rate hike when the Federal Reserve meets next Wednesday. However, the odds of a second hike in September dropped slightly (78% chance to 77% chance), and the odds of a third rate hike in December fell below our key threshold of 60% (60% chance to 58% chance).

More than what the Fed may do, what should prove more important is the timeline of fiscal stimulus expectations: tax reform and infrastructure spending hopes have been the primary drivers of inflation expectations (and thus US yields); without them, the US Dollar remains vulnerable. 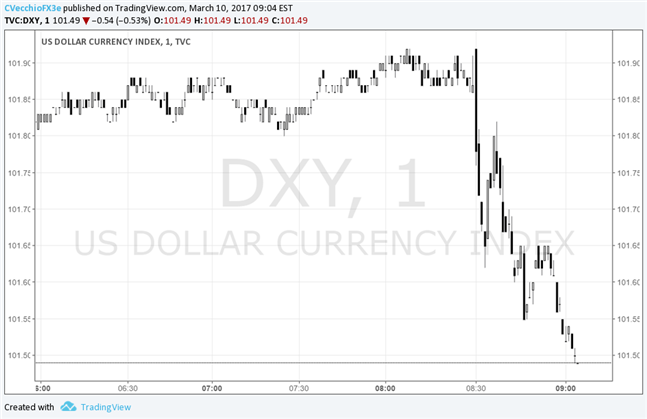