- Growth in housebuilding cools to a six-month low.

- But the British Pound claws back ground on Euro.

GBPUSD is extending its losses Thursday after uninspiring UK construction PMI and housing market data. The Markit/CIPS construction PMI rose to 52.5 in February from 52.2 in January, above the consensus forecast of a jump to 52.0.

But the modest rise was mainly down to the civil engineering index, which increased to 53.3, from 51.0 in January. The commercial construction component of the PMI dropped from 50.3 to 49.4, contracting for the first time in four months, suggesting Brexit uncertainty is weighing on orders. Growth in housebuilding also cooled to a six-month low of 52.2 in February, from 52.6 in January – with slowing orders another worrying sign that UK householders are reigning in their spending.

This is backed by a report Thursday from the Institute for Fiscal Studies warning that the UK is ‘in the midst of the weakest growth in living standards in at least 60 years’. This will put Mark Carney and Co at the Bank of England in no mood to change its stance on adopting record low interest rates. GBP/USD hit a session low of 1.2258 on thursday and is currently trading at 1.2269, a daily drop of 0.0024.

However, EURGBP is also down 0.0010 for the day at 0.8567, with core Eurozone inflation stuck at 0.9%, suggesting that the move lower in the Pound versus the Dollar is more down to Greenback strength. The Dollar is riding high as a March rate hike looks increasingly more likely. Fed Chair Janet Yellen’s economic outlook speech in Chicago at 1800GMT tomorrow and the US employment report next Friday will be the last confirming indicators.

Brexit bill shenanigans are also causing Sterling weakness. Yesterday the House of Lords defied the government and voted 358 to 256 in favour of an opposition amendment guaranteeing the rights of EU nationals in the UK post-Brexit. But the Prime Minister Theresa May’s spokesperson said she remains "committed" to meeting the deadline to trigger Article 50 by the end of March, and expects to use her majority in the House of Commons to vote down the peers’ amendment. He said: "Our message to MPs is that we expect this bill to go through unamended. MPs voted it through unamended and we expect that to be the case." 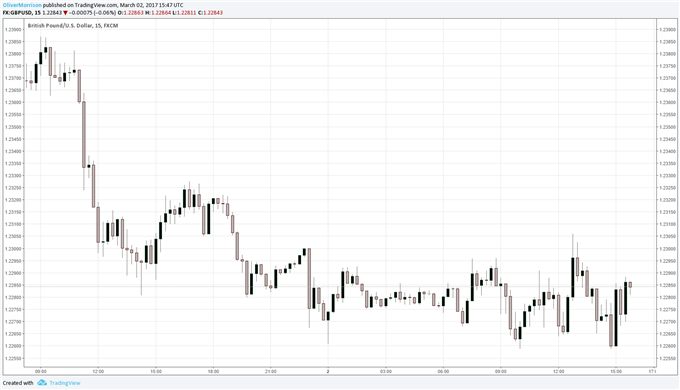