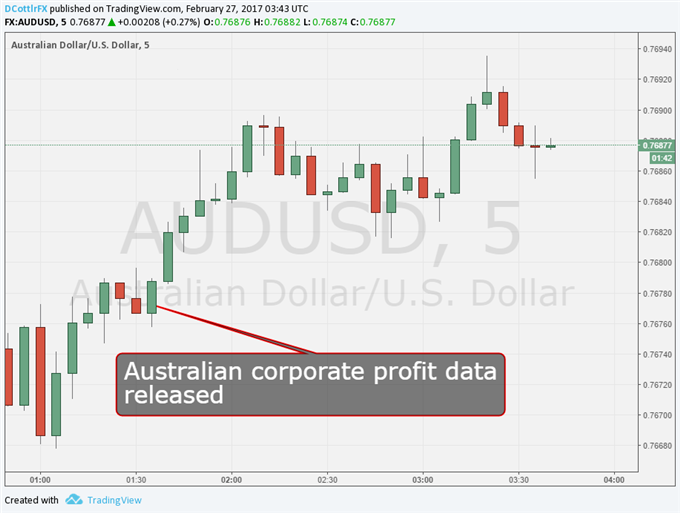 The Australian Dollar got a lift Monday on news that Australian corporate profits had smashed expectations utterly.

Profits rose 20.1% in the final quarter of 2016, official figures showed, compared to expectations of an 8% rise. Now mining-company performance accounted for the lion’s share of this. There profits rose 26.2%. This was largely thanks to surging commodity prices, with volume sales not up anywhere near as much. But even excluding the diggers profits were up 8.7%, which was more than expected. Overall profits rose 26.2% compared to the fourth quarter of 2015.

On one hand these data are very good news for the Australian economy. They make it even less likely that the old year’s fourth quarter will add another three months of contraction – and therefore technical recession – to go with the shock fall seen in the third. Official Gross Domestic Product figures will be released on Wednesday.

However, investors had already got over the third-quarter’s shock and weren’t expecting another growth slide, which may account for a rather muted reaction from AUD/USD. It rose to 0.76888 in the aftermath of the profit figures, from 0.76768 just beforehand. The superstar performance of the mining sector may also be cause for modest concern, too. Various economists including those at the Reserve Bank of Australia have wondered aloud whether commodity-price vigor can be maintained. To be clear, these are stunning results, but there must be question marks over the durability of current profit levels.

The Australian Dollar’s fundamental problem is that the economic data tend not to change the interest-rate backdrop, supportive though they often are.

US interest rates are thought likely to rise, possibly quite soon, while Aussie rates look stuck at record lows for the foreseeable future. The RBA is worried about what it calls “sobering” levels of domestic household debt. While it clearly doesn’t want to increase these by lowering rates still further, it is also mindful of the effect higher rates would have on debtors. It has also been known to worry about the Australian Dollar’s vigor. Higher rates would only add to that.

Would you like live commentary on the major market-moving events of the day? Check out the DailyFX webinars.