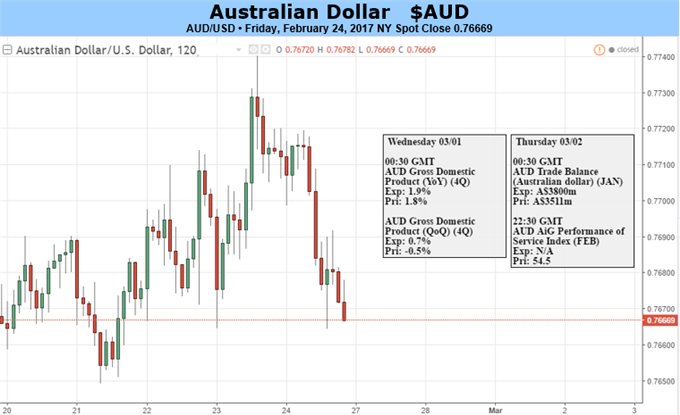 The Australian Dollar is in an odd fundamental place and arguably has been all year.

It’s not that the currency lacks supportive economic numbers. There’s been a record-high trade surplus. Both business and consumer confidence have picked up. There’s also been a better tone to much recent Chinese data. That should also be Aussie-supportive as the currency often acts as the markets’ favorite liquid China proxy.

Well, none of the good news is ever quite enough to move the dial on comparative interest-rate expectations between Australia and the US. That leaves the market stuck with the now-aging thesis that while US interest rates are going up, Australian rates are staying put at record-low levels.

The Reserve Bank of Australia tends to reinforce this message. Whenever its governor Philip Lowe gets near a mic he points out that lower interest rates are not what the over-borrowed consumer needs. But he also frets about the strength of the currency and suggests that higher rates aren’t coming soon either.

Could the coming week be different?

Investors are certainly up for a golden nugget of data. They’ll know on Wednesday whether the specter of technical recession has been exorcised. Official Gross Domestic Product numbers for 2016’s fourth quarter will be published on that day. Australia suffered a shock growth fall in the third. Another would mean two straight slides. That’s the commonly accepted definition of recession.

The “Lucky Country” hasn’t had one of those for 25 years. Will it now? Unlikely. The economists are more inclined to think that the third quarter was a nasty blip, and that includes those at the RBA. Still, it’s reasonable to assume that the currency might gain once the exorcism is confirmed. There are always those who buy on fact alone.

But will the interest rate backdrop change? Probably not. Unless GDP growth absolutely storms away, then the RBA will remain cautious. The US Federal Reserve is – as we know – on track to raise rates “fairly soon,” so while AUD/USD may not fall, it will still be struggling for reasons to rise far.

There are also plenty of US numbers this week too, from durable goods orders to the manufacturing index from the Institute for Supply Management (ISM). They could all keep the Fed-hike bandwagon rolling.

Still, the Aussie could get a boost from growth confirmation, even if it’s not a huge one. Of course, if GDP does slip again then all bets will be off.

Busy doing nothing much: AUD/USD 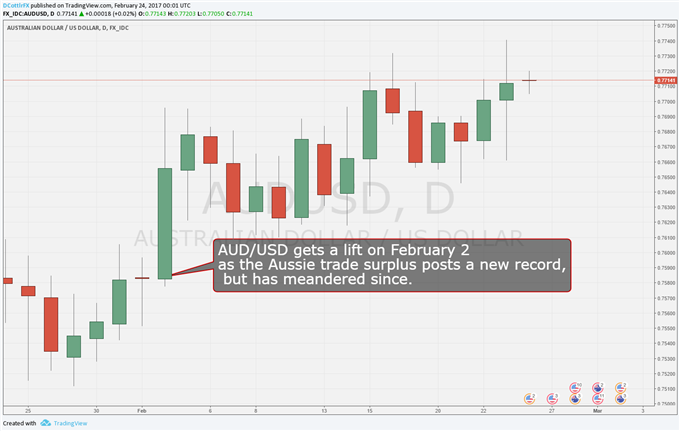 The year’s first quarter is well under way. How are DailyFX analysts’ forecasts bearing up?