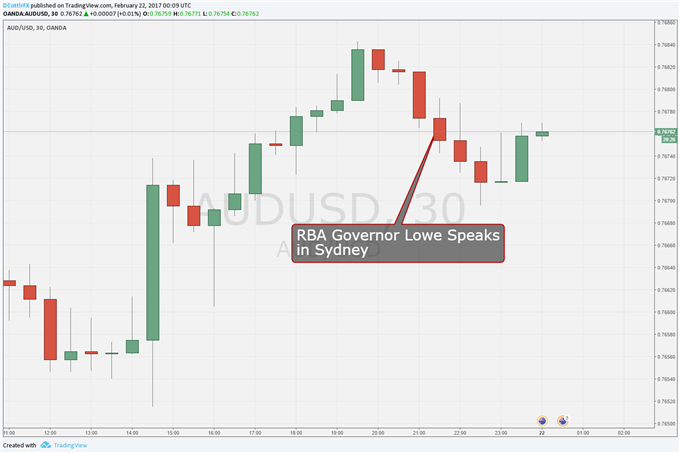 Reserve Bank of Australia Governor Philip Lowe reportedly said on Wednesday that more interest-rate cuts (from current record lows) were not the most sensible answer for the economy.

Lowe was responding to questions after a speech he gave in Sydney at an Australia/Canada business forum.

In the speech, he denied that the RBA’s 2-3% inflation target was under threat of a long undershoot, but worried aloud about household debt levels. Lowe reportedly said that some households face a “sobering” mix of high debt and low wage growth which will drag on spending. He also worried that this could mean that inflation expectations adjust lower.

“If inflation is low for a long period of time, it is certainly possible that inflation expectations adjust, making it harder to achieve the objective,” Lowe reportedly said. He added that he did not see a particularly high risk of this in Australia at this time.

Lowe also said that the RBA was “balancing multiple objectives.” It would like to see the economy grow a bit more, but that to do so via monetary policy alone would encourage more borrowing and more upward pressure on housing prices.

“I don’t think those are in the national interest,” he reportedly said.

Lowe also went in to bat for free trade and open economies.

"Too often these days, a commitment to open international trade, integration into global capital markets, a strong role for markets and a dynamic financial sector are seen as liabilities, not as assets."

"Australia and Canada provide strong counter examples. We show that openness can deliver both prosperity and resilience.

The Australian Dollar didn’t react much to Lowe’s words, which came very early in the Asia/Pacific trading session. AUD/USD slipped a little, but remains well within the week’s range.

Down but not by much: AUD/USD

His response to the question in further rate cuts in any case chimes with the prevalent market view that while Australian rates may not rise anytime soon, they’re not going any lower either.

Get live coverage of major, market-moving events with the DailyFX webinars.