Would you like to know more about trading currencies or commodities? Check out our DailyFX webinars.

To start off the new year, Brazil’s central bank (BCB) unanimously decided to reduce its main lending rate – the Selic rate – by 75 basis points from 13.75 percent to 13.00 percent. The cut was steeper than the 50 basis points expected. This brings interest rates to their lowest level since March 2015. In addition, the last time the Banco do Brasil reduced rates by 75 basis points was back in March 2012, almost 5 years ago.

According to committee members, the BCB’s action was in-part supported by recent inflation readingssettling more quicklythan expected. The central bank also noted that there are signs of more widespread disinflation which justified a bigger cut. At the end of 2016, inflation ended at 6.3% which was well below expectations. Going forward, Brazil’s central bank forecasted inflation to be around 4.0 percent in 2017 and then 3.4 percent in 2018.

Aside from CPI expectations, slower-than-expected economic activity also helped justify a bigger interest rate cut. While members noted that the recent approval of fiscal reforms by congress have been positive, there are risks to the outlook for growth. These doubts include a highly uncertain global economic outlook, the process of disinflation being sensitive to the business cycle and the process of approval and implementation of reforms taking time and carrying uncertainty.

Thus members concluded that the current scenario made it appropriate to frontload the monetary easing cycle and allow the new pace of easing. Going forward, the committee said that the extension of the easing cycle and possible revisions to it will continue to depend on inflation forecasts.

The policy announcement was released outside of active trading hours for the Brazilian Real exchange rate. However, the MSCI Brazil Capped Exchange Traded Funds (ETFs), an index composed of Brazilian equities, rallied as much as 1.6 percent as the interest rate decision crossed the wires. 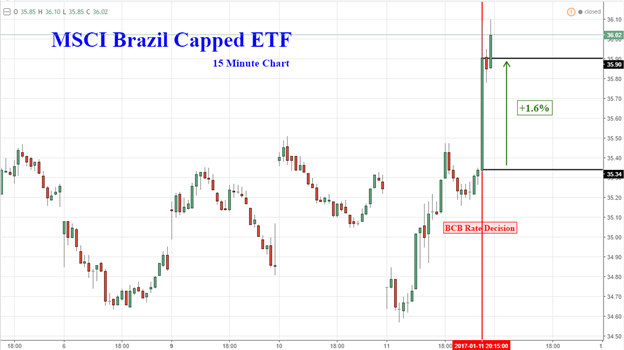